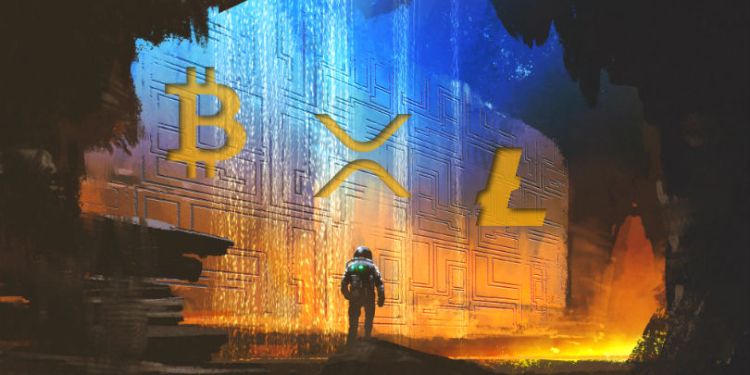 A closely watched veteran trader who became legendary in crypto circles for calling Bitcoin’s big collapse in January of 2018 is revealing his latest thoughts on BTC, XRP and Litecoin, the world’s first, third and seventh-largest cryptocurrencies by market cap.

Peter Brandt, who has previously said Bitcoin could rise to $100,000 in its current long-term cycle, says the king coin remains in an historic bull trend. In his latest weekly crypto outlook, Brandt says the leading cryptocurrency is now showing early signs that it could climb “a lot higher” than $100k.

“We can use this recent low that we’ve seen back in December that connects back to December 2018 as kind of now redefining the parabolic advance that could be in the process of developing now. And that has implications.

Brandt says BTC may be coiling in a bullish symmetrical triangle that dates back to late 2017.

But for now, I’m going to look at it as a symmetrical triangle continuation, and as time goes on and we start to challenge this upper line, especially if we take out the highs that we made back here in June, then we’ve completed this symmetrical triangle, and we can really start accelerating the bull trend in Bitcoin.”

As for the altcoin market, Brandt says Litecoin is also showing signs of a potential bullish triangle similar to that of Bitcoin.

As for XRP, Brandt says he often hears from investors who closely follow the third-largest cryptocurrency by market cap. Although Brandt says XRP may prove to be a “boomer” and rise exponentially in value, he stresses his belief that Bitcoin is the real crypto asset to watch

“I know many of you are Ripple fans, XRP fans. I’m sorry, I just can’t get all excited about that. I’ve talked about that in the past with you many times. For me, this is a Bitcoin story. Bitcoin is the legacy coin. I don’t want to be sidetracked because I think the granddaddy of them all is going to continue to be Bitcoin.

… XRP may very well be a boomer, but it’s also going to be a buster. So my focus will continue to be on Bitcoin and I’ll look at Bitcoin as the litmus test of everything else.”