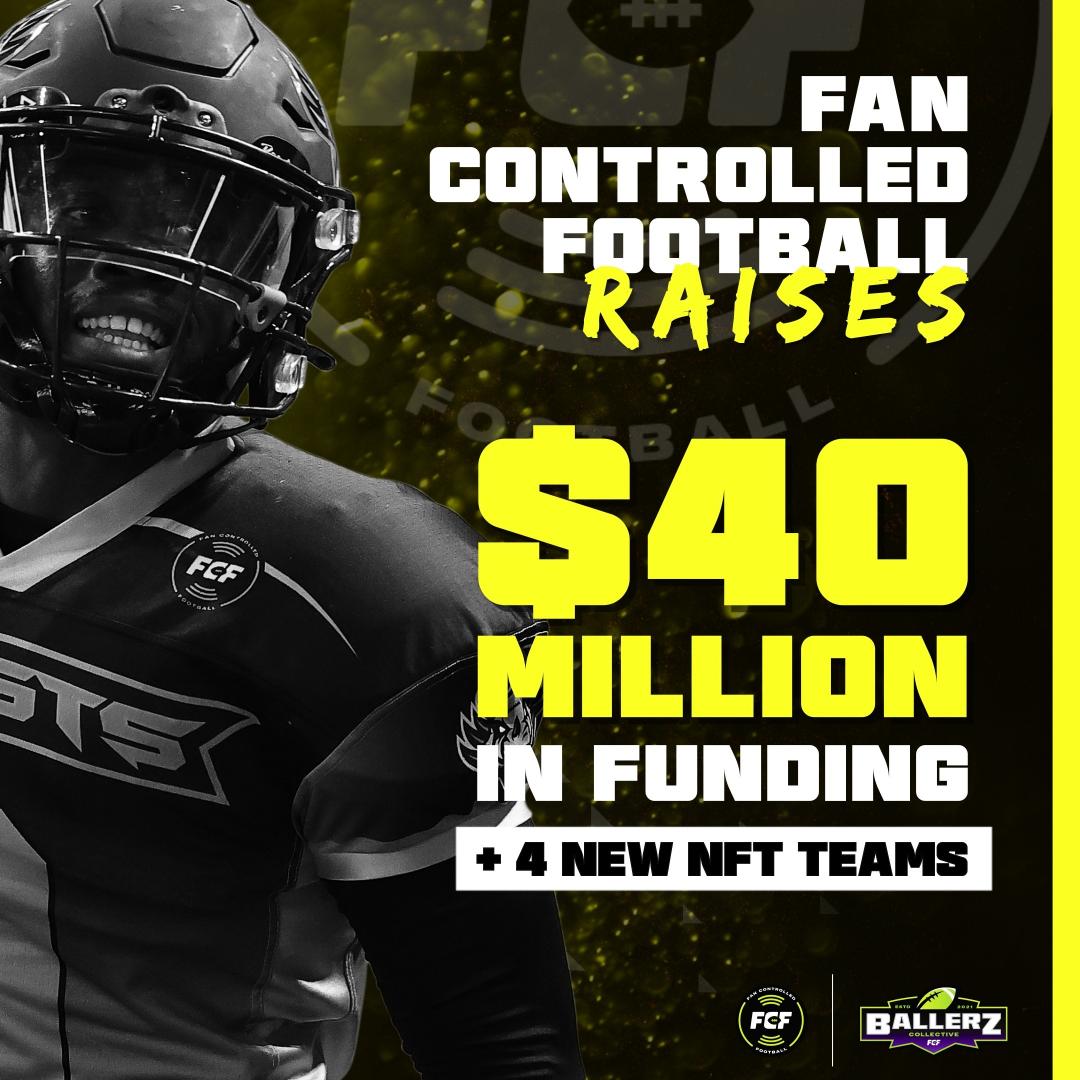 Fan Controlled Football (FCF) – the only professional sports league that empowers fans to make the key decisions for their favorite team, including calling all the plays in real-time – today announced the closing of a $40 million Series A investment round led by Animoca Brands and Delphi Digital.

FCF made its debut in February 2021, featuring four teams owned by some of the biggest names in sports and entertainment including Marshawn Lynch, Quavo, Richard Sherman, Austin Ekeler, Dalvin Cook and Bob Menery. The league has redefined football for the digital age by combining the competitiveness of live sports, the engagement of fantasy sports and the interactivity of video games into a live streamed, leaned-in fan experience. Season version one saw FCF become the fastest-growing live sports channel on Twitch with nearly 10 million total live views and one of the top sports apps in the Apple App Store.

As part of the growth fueled by the closing of the $40 million Series A, FCF today announced two new NFT-governed expansion teams, owned by leaders of the Bored Ape Yacht Club and Gutter Cat Gang communities, respectively. The two new teams join the first two FCF Ballerz Collective NFT expansion teams that were recently announced, doubling the size of FCF for Season version two from four teams to eight.

The four new teams will all be part of FCF’s innovative Ballerz Collective, a first of its kind NFT community that will provide fans holding FCF Ballerz NFTs with team governance rights, play-to-earn game mechanics and unique IRL utility and VIP experiences at FCF’s soon to be revealed state-of-the-art venue in Atlanta, Georgia. The Ballerz Collective NFT teams include the following.

NFT owners in each of these communities will be provided an opportunity to receive one of 2,000 free FCF Ballerz NFTs for their team, as well as early access to purchase an FCF Baller at a 50% discount to the public sale price. To join the team and get in the game, follow the Ballerz Collective on Twitter and join the FCF Discord.

The four original FCF teams include the Beasts, Glacier Boyz, Wild Aces and Zappers. On March 20, 2021, the Wild Aces went on to become the first-ever FCF champions after defeating the Glacier Boyz in the ‘People’s Championship’ on a last-second, walk-off QB read-option touchdown called by the fans.

Built for the digital fan, FCF’s games are played in a multi-purpose studio arena in Atlanta and streamed live on Twitch, NBCLX, Peacock and DAZN. The upcoming nine-week season will kick off on April 16, 2022, with eight teams stacked with pro-caliber players from the NFL, CFL and NCAA programs. Last season’s rosters included Heisman Trophy winner Johnny Manziel and NFL stars Josh Gordon and Robert Turbin.

“This is a historic day for FCF. The backing of investors like Animoca Brands and Delphi Digital, leaders in web 3.0, further validates our initial success and vision to build the first pro sports league for the digital age. FCF combines the passion and excitement of traditional football with the best of web 3.0, digital collectibles and play-to-earn gaming, creating a unique IRL meets URL entertainment experience that was not possible until now. Many startup football leagues never make it to a second season – and we are now pumped for season version two and version three of FCF. LFG!”

“We’re excited to support FCF, a league that is at the cutting-edge of bringing web 3.0 and blockchain to professional sports. Having followed its successful and entertaining first season, we look forward to the groundbreaking ways that fans will be able to engage with FCF in the upcoming seasons.”

“The successful strides that FCF is making within web 3.0 are exciting. It’s a privilege to be involved. Really looking forward to building out our NFT community of passionate fans that’ll be calling all the shots for our team.”

“FCF is getting they money up, securing them 40 millions. We ready for seasons two, three and some mo’. And special shout-out to the Bored Ape Yacht Club and Gutter Cat Gang peoples for linking up with our FCF fam. These are the types of partnerships that tell you we ain’t messing around. I can’t wait to see how the whole NFT thing takes fan engagement in the ‘game’ to a whole ‘nother level, ya feel me?”

Fan Controlled Football (FCF) – the only professional sports league that combines the passion and competitiveness of live and fantasy sports with the interactivity of video games – is the first league in professional sports history empowering fans to call the shots, from branding and personnel decisions, to real-time play calling. The FCF is the democratization of sports with season version two expanding to eight teams kicking off in the spring of 2022, featuring seven regular season weeks and one playoff week, culminating with the ‘People’s Championship.’ Regular and postseason play, in addition to exclusive behind-the-scenes league content, is available on Twitch and broadcast partners NBCLX, Peacock and DAZN. For more information, download the FCF mobile application, visit the website and join the conversation on Twitter, Facebook, Instagram and Discord.