by Steven Buchko
in Bitcoin 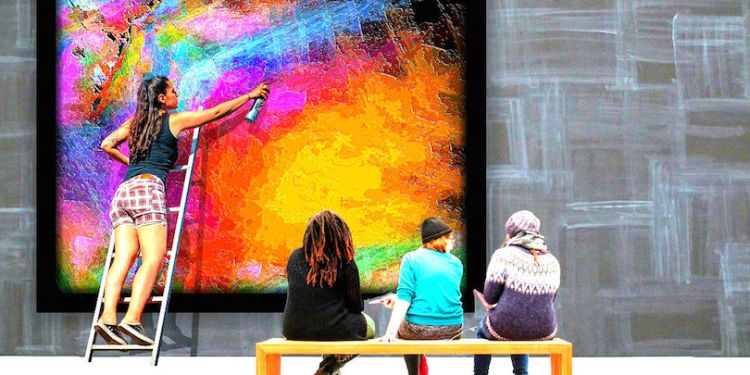 Art probably isn’t the first thing that comes to mind when you think about Bitcoin and other cryptocurrencies. However, blockchain art projects have been around almost as long as the blockchain itself.

In this article, we’ll take a look at six of the most popular blockchain art projects and how the artists behind them are using blockchain technology in their works.

The Scarab Experiment is a decentralized artist collective focusing on combined artwork. Created in 2014, SCARAB is a multi-user persona that uses artificial intelligence (AI) image processing to form a single work of art from one thousand submissions. To contribute to the collection, you just need to register and submit your piece of art here. In return, you’ll receive a Scarab token.

This token grants you membership into the Scarab community and allows you to vote for which pieces of art are included in the combined piece. The team used Counterparty to create the tokens and there will only ever be 100,000 Scarab tokens in existence. Beyond voting, you can also trade Scarab tokens through the Counterparty DEX. They’re currently trading at around $13 a token giving the project a ~$30,000 price tag with the 2,298 tokens in circulation.

The first piece of conjoined artwork is still in progress, but you can see how it’s turning out here.

One of the odder blockchain art projects, Rare Pepe trading cards, also uses Counterparty. These cards began as a meme on 4chan with users photoshopping images of Pepe the Frog, a human/frog hybrid cartoon character. Users would add a watermark of authenticity to each new image and dub it a “Rare Pepe.”

Rare Pepes gained popularity as they seemingly parodied almost every pop culture icon from Homer Simpson to Vincent Van Gogh. Pepe even became somewhat of a cult icon for Donald Trump’s campaign in the 2016 presidential election.

What started as a joke has now grown into a full-blown trading economy. Rare Pepe trading cards are actively traded over the blockchain and can sometimes fetch prices north of $10,000. The currency that fuels this economy is Pepecash. You need to pay a Pepecash fee to apply your artwork to the Rare Pepe directory and most artists only accept Pepecash for their works.

In December 2017, CryptoKitties took the blockchain world by storm, and the team behind the project just raised $12 million in funding. The investor list includes notable names such as Andreessen Horowitz and Union Square Ventures.

CryptoKitties are collectible cartoon cats that you can buy, sell and breed using Ethereum. They became so popular at one time that the increased usage from people interacting with them caused major congestion on the Ethereum network. The congestion was bad enough at times that some projects had to postpone their ICOs.

Similar to the Rare Pepe cards, each CryptoKitty is unique and has a certain level of rarity. While the majority of the virtual cats will run you less than $25, some of the rarer ones cost in the thousands. The most expensive cat on the platform was purchased for over $100,000.

The popularity of CryptoKitties has led to numerous spin-offs like Etherbots, CryptoPuppies, and even CryptoCelebrities.

Although it doesn’t directly use the blockchain, the Bitcoin monument at a traffic circle in Kranj, Slovenia is a great example of the technology’s impact on society. The monument, funded by Bitstamp and 3fs, is the first public monument dedicated to Bitcoin.

City authorities of Kranj (Slovenia) placed a statue shaped as a Bitcoin logo at the roundabout near the city center.
Link: https://t.co/7NFU6lbMxV#Crypto #Bitcoin #Cryptocurrency #Blockchain #Slovenia

The Kranj citizens chose Bitcoin to be the subject of the piece through a discussion on the city’s Facebook page. Slovenia has consistently been one of the more open countries towards blockchain technology, so the citizens voting for something Bitcoin-based is no surprise.

Slovenian officials are working with several blockchain businesses to help educate the country’s citizens about the value of the technology. And, companies in the region have also formed the Blockchain Alliance CEE to facilitate communication and improve cryptocurrency’s reputation. The Kranj government wants the monument to represent the city’s forward-thinking attitude towards new technologies.

Maecenas is “the first open blockchain platform that democratizes access to fine art.” With Maecenas, anyone can become an art investor.

For just a 2% fee, you’re able to invest in any of the pieces in the gallery. This is significantly less than the 20% often charged by art auctioneers. And, because you don’t have to purchase an entire piece, you avoid shelling out hundreds of thousands of dollars to support the most popular works.

On the other side, collectors and galleries can easily and affordably sell portions of their artwork to investors. This allows them to dodge high-interest loans when purchasing new pieces for their collections.

The platform’s blockchain records all of the transactions utilizing its ART tokens. If you use ART tokens or other cryptocurrencies, there’s no minimum to the amount you need to invest. However, using fiat has a $5,000 minimum per investment and a $50,000 required start-up deposit for your account.

Anime Coin is a platform for you to create, hold and trade digital anime artwork on the blockchain. The goal of the project is to help to improve ownership provenance with digital-based works. When you create a piece, you set how many copies you’d like to distribute. That number and name metadata are stored directly with the image file.

Once you’ve created your anime, you can sell it for ANIM tokens on the ANIM decentralized exchange. Similar to Bitcoin, ANIM has a maximum supply of 21 million. The platform also includes masternodes capable of creating Waifu Assets. These assets are one-of-a-kind and connected to specific anime characters. Only one Waifu Asset per character.

Blockchain’s effect on the art market is apparent. Today, collectibles and decentralized galleries are the hot ticket projects, but that could easily change tomorrow. Just as the art industry and popular styles have changed countless times throughout history, blockchain art projects are bound to evolve as well.

No one knows what will come next in this fast-changing industry. But, one thing is certain: creatives will continue to use the blockchain to further mold their artistic works.

This article by Steven Buchko was originally published on CoinCentral.com, our media partner.