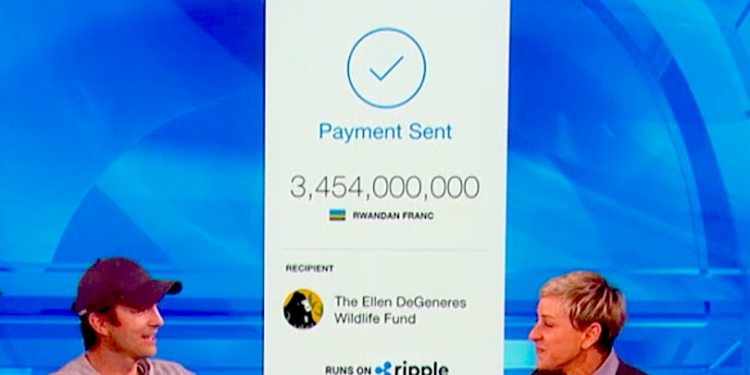 Ripple’s XRP showed off its prime-time speed when Ashton Kutcher surprised Ellen DeGeneres on air with a gift of $4 million in the cryptocurrency. The donation was made as a late birthday present to the celebrated talk show host’s wildlife charity on behalf of Ripple. Kutcher had DeGeneres push a button on his smartphone to trigger the transfer. The $4 million XRP transaction occurred in seconds to a delighted DeGeneres.

Kutcher gave Ripple a major plug to Ellen’s millions of views calling it “really, really interesting.” Kutcher also did a lot to clarify the relationship between Ripple and XRP.

“We found this company, and we thought it was really, really interesting, and it runs on this stuff. It’s called XRP, which is a cryptocurrency. Basically, it’s just a way to get value from here to there.”

Kutcher then got emotional as he explained how he and his business partner Guy Oseary had a meeting with Ripple execs Chris Larsen and Brad Garlinghouse. They chronicled the many gifts Ellen has bestowed on others in need over the years and mentioned how she herself was not the recipient of a major donation. That’s when Kutcher pulled out his phone and declared, on behalf of Ripple, the XRP donation. In lieu of an Ed McMahon-sized giant check to signify the large gift, Ellen’s producers projected Ripple’s mobile app onto the stage. Kutcher explained that a simple touch of the button would transfer all of the XRP to Ellen’s account instantly, transferring it into Rwandan francs “right here, right now” for her humanitarian mission. No bank required.

After Ellen tapped the button on his phone, the stage lit up with a large Ripple logo as the audience roared with a round of applause over the cryptocurrency transaction.

The moment highlighted the power of celebrities to convey how easy it is to use cryptocurrencies. Ripple touts a transaction speed of 1,500 transactions per second, 24×7. The company says it can scale to handle the same throughput as Visa.

Ripple offers a suite of products and platforms that have been tested by several banks including Santander which uses Ripple’s xCurrent technology for its international money transfer service, OnePayFX. Ripple has a reputation among banks for having secure technology that can handle huge volumes.

XRP is currently the third largest cryptocurrency by market cap, after Bitcoin and Ethereum.