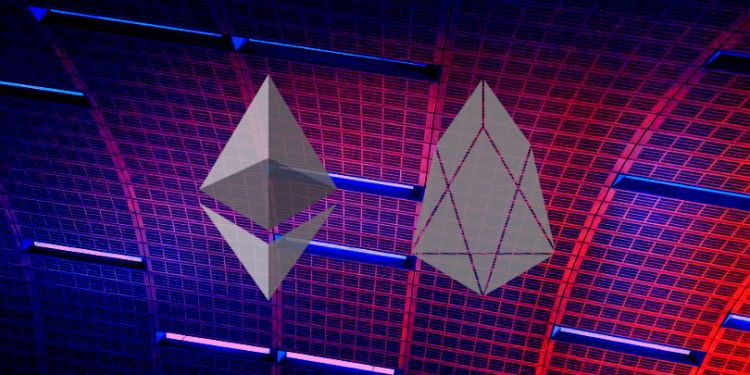 There are hardly any other cryptocurrencies with a rivalry as tense as Ethereum and EOS. Coming in as the number one and number two decentralized app (DApp) platforms by market cap size, both cryptocurrencies polarize crypto enthusiasts as to their preference.

Ethereum was the first in the smart contract space and boasts a strong community. However, fans of EOS believe it improves on enough of Ethereum’s shortcomings to dub it the “Ethereum killer.”

The platforms share many similarities; however, at their core, they differ in their methodologies to overcome the scalability trilemma.

The scalability trilemma is an inherent problem in blockchain technology that no one has yet to solve. It states that every blockchain has three main characteristics:

Blockchains face trade-offs between these characteristics. They can have, at most, high levels of two out of the three. Any increase in, say, scalability will cause either more centralization, less security, or both.

The Ethereum and EOS communities approach the trilemma in two fundamentally different ways.

Ethereum supporters value decentralization over everything else. The platform currently uses a Proof-of-Work (PoW) consensus algorithm in which miners produce new blocks. However, there are plans to switch to Proof-of-Stake (PoS).

No matter the consensus mechanism, it’s clear that Ethereum is, and will be, decentralized for the foreseeable future. Right now, anyone can buy a mining rig and start contributing to block production. And, with the switch to PoS, as long as you stake the ether you hold, you become a potential block producer. The network doesn’t limit the number of block producers.

This level of decentralization does have some drawbacks, though. Ethereum has had a considerably difficult time scaling under the current conditions. Right now, the network processes a maximum of 15 transactions per second (TPS). Comparing this to VISA’s 24,000 TPS demonstrates a massive roadblock to substantial adoption.

In fact, in 2017, one single game, CryptoKitties, caused so much traffic on the blockchain that the network became congested, causing slower transaction times and higher fees.

The Ethereum developer community isn’t without solutions, though. Other than switching to PoS via the Casper protocol, they’re also implementing second-layer scaling, specifically Plasma. Plasma is akin to Bitcoin’s Lightning Network in that the changes don’t directly affect the root blockchain.

To further improve scaling, the developers are applying sharding to the blockchain as well. Sharding effectively splits the blockchain state into “shards,” so that nodes reach consensus simultaneously rather than in the linear fashion they currently do.

Those favoring EOS are okay with some level of centralization for the sake of improved scalability. The network operates using Delegated Proof-of-Stake (DPoS). With this mechanism, 21 nodes produce new blocks – no more, no less.

As an EOS token holder, you stake your tokens to vote for a Block Producer. Already, this configuration is much more centralized than that of Ethereum.

EOS also contains a constitution which guides activity on the network. If you break a constitutional guideline, you run the risk of not being able to access your funds. Even though EOS launched just this year, there have already been several instances of frozen accounts.

However, EOS’s higher level of centralization grants improved scaling. Instead of waiting on thousands of nodes to reach consensus, the blockchain just needs agreement from the 21 Block Producers. This scalability improvement has enabled EOS to achieve over one thousand TPS.

Opponents argue that EOS’s amount of centralization defeats the purpose of having a blockchain in the first place while others deem it a necessary evil for adoption.

Ethereum vs. EOS – Other Differences

Other than the seemingly opposite approaches to the scalability trilemma, Ethereum and EOS have some other dissimilarities as well.

EOS boasts zero transaction fees. Instead of a fee, executing a smart contract requires you to stake tokens that you immediately receive back after execution. DApp developers choose whether they’re the ones who stake tokens for their users or if the users must stake their own.

Ethereum requires you to burn ETH (Gas) when executing smart contracts. The amount of gas you need to burn depends on the network congestion as well as the complexity of your contract.

If you’re writing an Ethereum smart contract, it’ll most likely be in Solidity, a contract-oriented language that the Ethereum core developers created.

Most EOS developers use C++, but any WebAssembly language will do.

Some developers prefer working on EOS rather than Ethereum because they have experience with C++, one of the most popular programming languages. However, several programmers have stated that Solidity isn’t difficult to pick up. And, it shows. Ethereum has one of the largest (if not the largest) developer communities in the blockchain space.

Ethereum has quite a head start on EOS. The project held a crowdsale in the middle of 2014 and launched on July 30, 2015. It raised $18.4 million during the crowdsale.

EOS has quite a different story. The project held a year-long ICO, from June 2017 to June 2018, in which it raised over $4 billion. The project launched the main net this past June.

Ethereum vs. EOS – Similarities in Leadership

Although the projects taut a community-driven approach to decision making, they both have some form of centralized leadership. These leaders may not have direct control, but they do have a significant influence on the direction of their associated cryptocurrencies.

Block.one, a company led by Dan Larimer of BitShares and Steem fame, created EOS and holds ten percent of the total supply of tokens. To the surprise of some community members, Block.one staked those tokens and has participated in the Block Producer elections. Some opponents argue that this amount of voting power gives Block.one an unproportionate amount of control over the fate of the EOS blockchain.

From the DAO hack to a plethora of launch time bugs, neither cryptocurrency is without their controversy. Although Ethereum has a head start, the evidence is clear why some people consider EOS to be the Ethereum killer. It has no transaction fees, a $4 billion bankroll, and keeps scalability as the most critical attribute.

However, EOS’s centralization has already proven to be somewhat of a hindrance. With the majority of DApps already operating on Ethereum, it’ll be a challenge for EOS to dethrone the king.

Over time, their fundamental differences in centralization and scaling could easily mean survival for both of them as developers choose the one most suited for their specific use-case.