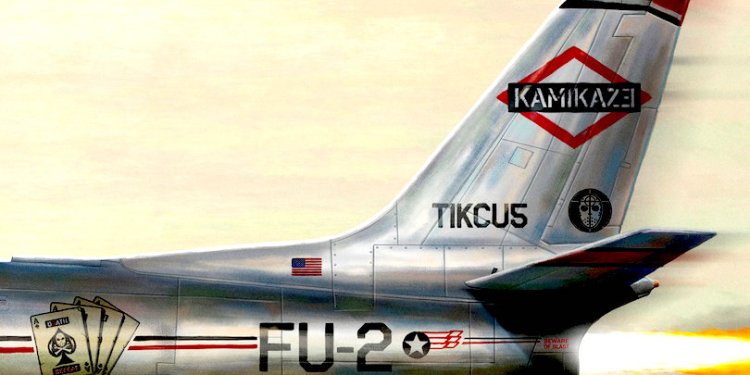 Bitcoin is winning pop minds and rap hearts on Eminem’s surprise new album Kamikaze, released at midnight on Friday, August 31. The world’s number one cryptocurrency got a shout out on a track called “Not Alike” that throws lots of dust on fiat nickels, and opens up the bandwagon for digital gold.

Eminem grabs the ear-bending, hardcore chorus laced with all-American pop references to IHOP, iPod, Payless and Playtex, before Royce da 5’9″ lays back with some Bitcoin on a freestyle verse.

The Tay Keith-produced track already has a 98% approval rating on hotnewhiphop.com where fans are raving.

NiagaraFallsMane
and here i was thinkin em wasn’t what he used to be, he just came back harder than ever. wow.

Made_to_Post
They went hard on this track! Damn

Eminem’s 10th studio album shoots down enemies and calls out everything cool, including Bitcoin. The surprise release, exec produced by Eminem and Dr. Dre, may be just the mouth-to-mouth resuscitation the rapper was craving.

“This late-career slump reached its nadir with December’s Revival, a 77-minute cringe compilation of lousy punchlines, antiquated beats and bloated pop-rap crossover bids. Revival debuted at No. 1 on the Billboard 200 but only with 1/3 the sales of its predecessor, The Marshall Mathers LP 2, and failed to produce a Top 10 single on the Hot 100.” – Forbes

If he was trying to take your breath away last December with Revival, Kamikaze’s predecessor, and if you’re still waiting for the punchline, Kamikaze is it.

Tried not 2 overthink this 1… enjoy. ?#KAMIKAZE Out Now – https://t.co/ANw73KbwMt pic.twitter.com/qfQoTYBTUy

Eminem instantly got over 217,000 likes from his 21.8 million fans on Twitter shortly after he tweeted the arrival of Kamikaze.

The down and dirty release gets raw – quick. Eminem takes on Trump and Lil Pump, insults the media and music critics, and dumps on younger rappers with salty, nutty, nasty, smutty raps that “rape the alphabet” and “get a mouthful of flesh – and yes, I mean eating a penis.”

The urgency is fresh and incendiary, flipping bitter for worldwide attention, and turning Eminem’s controversial verbal venom into rap magic. And Bitcoin is along for the ride, as the novel technology shows off its versatile and infectious appeal. It can hang with anyone – from comp sci introverts and crypto pioneering extroverts to a world-famous celeb who will shove Bitcoin-as-new-money in everybody’s face – love it or hate it.