by Robert Sharratt
in HodlX 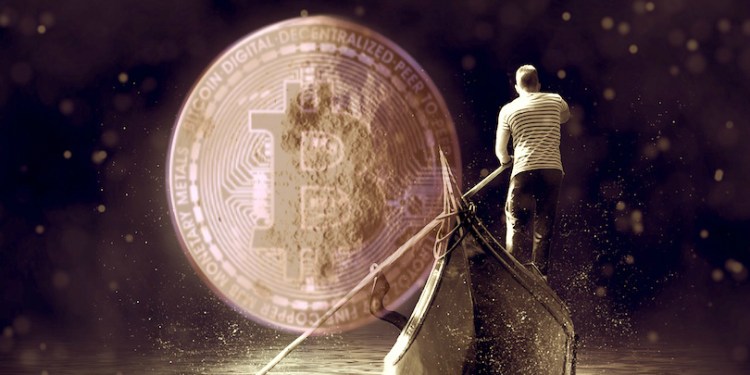 Money and banking: A story of values

There will be near-universal adoption of the crypto system in the next decade, and other predictions.

“I know of only three people who really understand money.”

What will you get out of this paper?

Who should read this paper?

Understanding money and banking will help you solve the greatest mystery in modern economics: why does our economy suffer catastrophic breakdowns, causing significant human misery, every few decades? This paper has some clues.

The development of money was a natural part of human evolution: it was driven by our biology and our values. Money arose as an extension of our memory and represented something valuable created through specialised effort, which was used by the group and then, later, exchanged with others through trade. We acquired the concept of stored memory to shift value across time periods. As we specialised further and repeated exchanges across time, this gradually led to the concept of a standard of value, the first step towards money.

Money allowed us to specialise and exchange items of value. Money is often defined using complex language, but it only has two simple, common-sense characteristics:

(2)  Money needs to be accepted by others as having purchasing power.

Money co-evolved with our ancestors’ discovery of sacrifice. Seeds planted today, rather than eaten with a crop, could mean more next season. Borrowers could repay lenders from what was brought forth by their efforts: when the grain harvest was brought in, a certain percentage was given to those who had sacrificed. Loans and interest due were recorded on tablets and quoted in money. Sacrifice, a form of savings, and the productive use of this savings, benefitted both parties and led to a better existence for humanity.

1 John Maynard Keynes, British economist, cited by several contemporary sources.  Unfortunately, for him, Keynes does not appear to be one of these three.

Money itself is only a symbol, a representation of purchasing power; it is not valuable in itself. Gold, US dollars, bitcoin, etc. have value only to the extent that they are scare and are commonly accepted to purchase goods and services. Since money has no intrinsic value, it must be trusted. The basis of all good money is trust, just as it is the basis for all good human relationships.

Where precious metals were present geologically most societies adopted them as money; they did this because precious metals are scarce. This allowed something that has no intrinsic value to act as a symbol that retains purchasing power over time. The global acceptance of precious metals meant that they could be exchanged for goods and services in ever distant trade and that their value was not tied to the actions of a specific nation state.

As carrying gold and silver around was somewhat inconvenient and risky, the precious metal depositories that emerged issued paper IOUs to customers, like merchants. These paper IOUs, backed by the value of precious metal, could be used for making purchases and the IOUs themselves began to circulate as a form of money. The depositories learned that not all customers demanded access to their deposit at the same time. This presented an opportunity to make loans using paper receipts for more than the total amount of precious metal that they physically held. In this way a “fraction” of the value was kept in reserve and the rest could be lent out. Precious metal depositories led to the creation of banks. Modern banks use exactly the same model today as the depositories from history.

Money and banking are inextricably linked. The history of money can be broadly divided into two periods, as set out below.

Although this evolved over time, it led to a decisive change in what money meant to humanity:

The rise of modern banking broke the historic link where money represented the memory of something valuable created.

Modern, fractional-reserve banking is characterised as set out below.

Here is the best way to understand our current fractional-reserve banking system.

Fractional reserve banking is an inherently risky activity. The core philosophy of fractional reserve banking is based on dishonesty. The bank tells depositors that it is their money, sitting in their account, and they can have it back at any time. At the same time, the bank lends most of the money to borrowers or uses it themselves, including as an input to their own credit money creation.

If future cashflows needed to support bank loans (and the FV money that they create) do not materialise, recursive credit money destruction causes economic crises and means that the bank may not have enough reserves to cover the lie that they told depositors: that they could have their money back anytime. This is what happened in the 2008 financial crisis, prompting the bail-out of the fractional reserve banking system.

An inverted house of cards 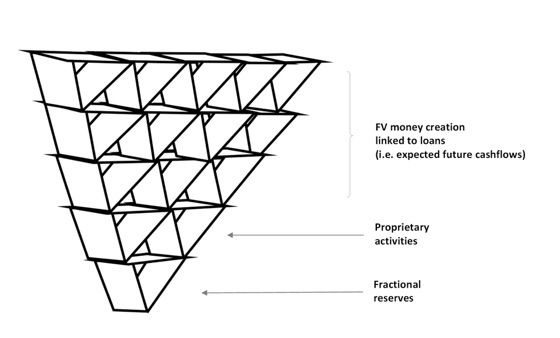 2The repayment for which is based on future salary expectations.

Here are the top 3 things that banks don’t want you to know.

Don’t feel silly if you don’t know this; banks are intentionally opaque. There is a reason you are made to feel stupid or uncomfortable when your mind wanders to thinking about how banks work, or to define what money really is. In fact, in economics textbooks and at business school, they don’t teach you that banks create money; they keep up the deception that banks are just helpful financial intermediaries, the Walt Disney version of how banks operate.

“It is well enough that people of the nation do not understand our banking and money system, for if they did, I believe there would be a revolution before tomorrow morning.”  – Henry Ford

Robert is part-Canadian, part-British, somewhat autistic and lives in Geneva. He is going to link the crypto system to the real economy and create a better banking model, or die trying. His interests include mountain-climbing, chess, piano, programming and distrusting authority. In his early career, he was an M&A investment banker in London, then in private equity, and then moved to Switzerland to invest his own money. He holds an MSc degree in Finance from London Business School.