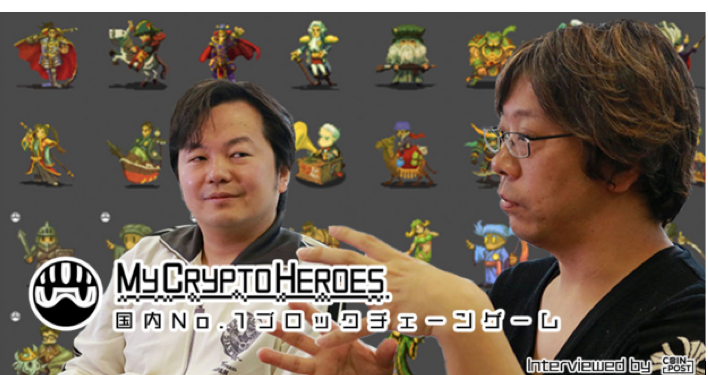 The interview focuses on the game’s core feature of the “Shi-No-Ko-Sho Ecosystem”, and their strategy for market expansion in and out of Japan.

Shi-No-Ko-Sho is the Confucian concept of “the four people groups”. This belief suggests that people fall into one of the four categories: Samurai/Warrior, Farmer, Artist, or Merchant.

How is My Crypto Heroes operated differently than other traditional mobile gaming apps?

We initially decided that players who joined this game from the early stages (presale and cloud sales) should be cherished not as mere users but stakeholders.

The design of this game is significantly different from all other existing games.

This is highlighted in the concept of assets. The basic idea of an asset in a social game is to keep inflating. This means the strength and quantity of assets fluctuates depending on the time of management and the number of users.

However, we completely flipped this concept with MCH. From the beginning, we deliberately planned to have the ultimate rank of an asset (i.e. Legendary assets) and limit their supply.

We also targeted people who have experience in trading cryptocurrency and were already involved in DApps.

We thought it might be difficult to understand the concept of blockchain games for many gamers, with people withdrawing from the community if forced to enter the space.

It wasn’t a realistic idea that “we” as a developer teach new users who don’t have any experience with DApps. I believe our approach is to focus on users who are already interested and using DApps.

We had some bias towards people who have a large share of cryptocurrency or people who jumped into blockchain gaming at the beginning. However, as we found out, many people in crypto are heavy (and serious) gamers!

Tell us about the “Shi-No-Ko-Sho” ecosystem that is a defining aspect of this game and its attractiveness.

Having an ecosystem is imperative for blockchain games. It is like trading assets – everyone gets something they need, then they can pass it to someone else who wants them. The cool part of this blockchain game is the circular trading system of assets.

But, it might prevent an optimal solution for both game and economy if the structure is designed poorly. If so, everyone will choose the same strong characters and similar parties.

If the trading gets stuck and won’t flow, then the ecosystem won’t work.

In the role of “Shi-No-Ko-Sho”, if we gather personae who have different purposes of “What do you want to do in MCH World?” in one place, everyone’s optimal solution will advance a gap in a good way because optimal solutions are all distinguished.

This gap can cause a new trend which leads to the creation of an “ecosystem”. So I think the most important thing is to gather people into different roles in one game in the ecosystem.

Therefore, when other companies make a blockchain game, they need to figure out a game or ecosystem that can gather people in different roles. Otherwise I think the in-game economy won’t flow much.

Why did you have Edo Period as a theme?

The word “Shi-No-Ko-Sho” has four different meanings. The word “Shi” specializes in the “Battle (or duel) to pursue the strength in PvP (Player vs Player).” The word “No” represents the miners who collect rare equipment as known by an extension in the node. The word “Ko” represents art which draws illustrations of pixel art using the function “Art edit” to create a value by changing the appearance of heroes. The word “Sho” means business, where users can earn by repeatedly trading assets in the game. These four roles are used as a motif from the occupational hierarchy of Edo period.

While accepting diverse play styles, playing the game in your own way or method is the defining part of MCH.

This is a game that everyone can enjoy. People can gain items as long as they spend time on it. Also, even if you cannot win in PvP, by making steady work you can acquire some lucky items.

The “Ko” part is crafting, like in the game “Minecraft” with these elements already in the existing game.

What expanded greatly in the blockchain game was introducing the concept of “Sho” (business).  This “Sho” part circulates the other part of “Shi”, “No” and “Ko” and constructs the ecosystem to bring blockchain games to a different level.

Pretty much, creating a mechanism to establish this “Sho” has become the foundation of the designing ecosystem, which is based on the “Shi-No-Ko-Sho” foundation, and this matches with the blockchain and cryptocurrency mechanism.

So I guess playing “Sho” in MCH might be the most fun part of the game right now.

To put it simply, I believe TV commercials have made a great impact.

Our goal of a TV commercial was to let people know that blockchain games are a legitimate type of game that people can enjoy.