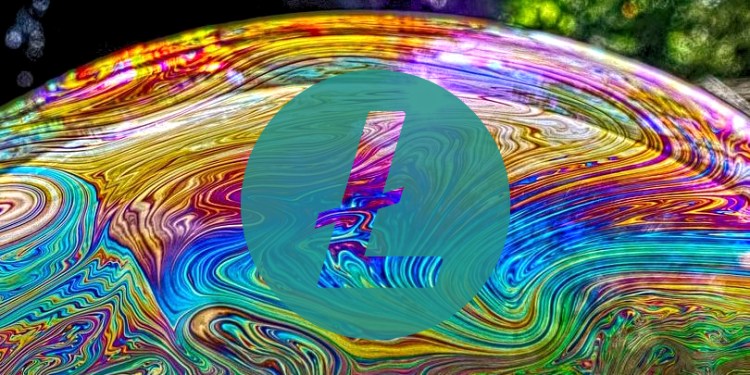 The last two parts of this series cover Litecoin’s development history, working mechanism, the transaction speed of the Litecoin network, and mining distribution including the block reward halving.

In the final segment of this series, we will take a deep dive into Litecoin’s market performance, network performance, and its ecosystem building.

As of now, commercial transactions and settlements have to go through multiple procedures, involving many organizations, and this becomes even more complicated when it comes to cross-border payments. Cryptocurrency payments led by Bitcoin (BTC), on the other hand, present an alternative for people through a peer-to-peer exchange, eliminating the middleman and cutting down costs.

However, Bitcoin payment is still in its nascent phase and is grappling with the challenges of slow confirmation speeds, limited throughput, concentrated hash power, scalability dilemma, and other issues. To put it simply, Bitcoin is still struggling to meet people’s demands for payment. Litecoin was developed to solve these dilemmas like other altcoins. Enlightened by Bitcoin’s whitepaper, Charlie Lee developed a lighter version of Bitcoin that enhanced Bitcoin’s confirmation speed thanks to its unique technologies in Scrypt algorithm and Segwit mechanism. As of this writing, Litecoin ranks in the top five coins on CoinMarketCap with a market cap of up to $5.012 billion, 5.4% of Bitcoin’s value.

Both Lighting Network and SegWit (short for Segregated Witness) were hailed as the solutions to scalability issues. Segwit was activated on Litecoin on May 10, 2017, and on Bitcoin on August 23, 2017. SegWit’s initial intention was to fix a bug in the Bitcoin code called transaction malleability. SegWit fixed transaction malleability by removing the signature information and storing it outside the base transaction block. In fact, SegWit does not increase the block size but only increases the number of transactions within the 1MB blocks, thus improving the scalability to some extent.

The Lighting Network, on the other hand, is a protocol where frequent and small transactions will be carried out of the main blockchain. Litecoin has successfully implemented both Lighting Network and SegWit.

Scrypt is memory intensive because it carries out both the functions of requiring miners to generate numbers rapidly and storing these generated numbers in the Random Access Memory (RAM) of the processor, which then needs to be accessed before submitting a result. The Scrypt hash function was initially implemented by the Litecoin development team to Application-Specific Integrated Circuits (ASICs) which makes the mining power easily concentrated in the large mining pools. However, Scrypt algorithm makes the hash power more distributed, thus reducing the possibility of 51% attacks.

Scrpyt’s memory intensive design makes it hard for ASIC miners to exert more power in the Litecoin ecosystem, which aligns with blockchain’s core principle of decentralization and distribution. Scrypt algorithm makes people work towards a more decentralized direction and was generally recognized among the Litecoin community. 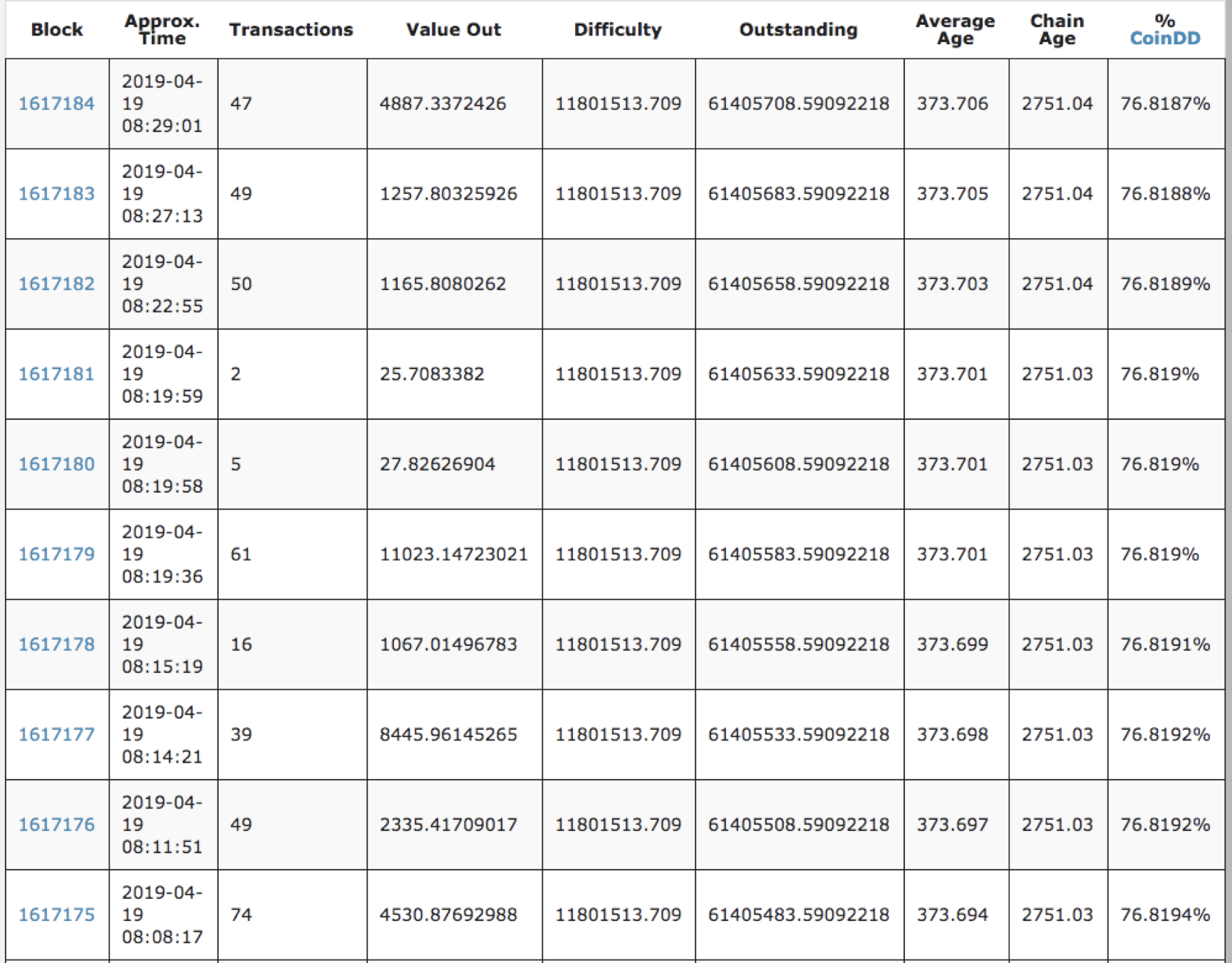 According to the above chart, transactions per Litecoin block have not yet reached the full limit of the block size.

The block size of LTC stays within 50,000 bytes and has witnessed two marked rises pre and post April 7th.

Litecoin block was generated about every 200s and is delivered at a stable rate.

3.5. The Active and Newly Added Addresses 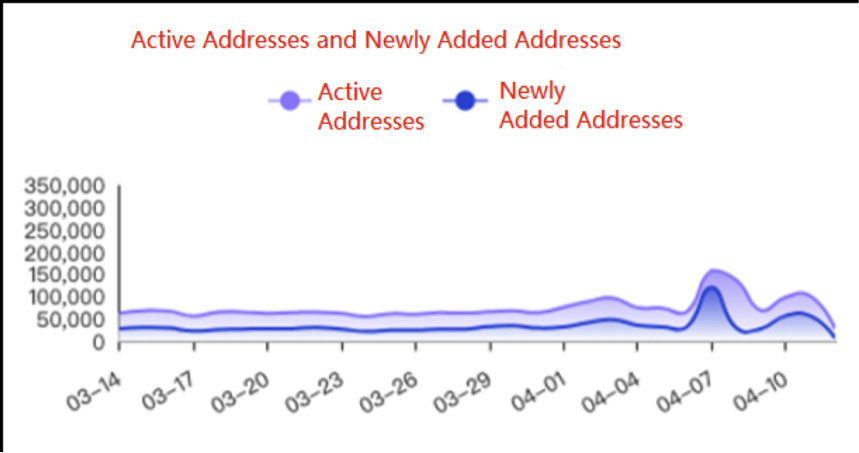 The active addresses on the Litecoin network are increasing steadily, with more users joining the network on April 7th, thanks to its relatively lower transaction fees and faster confirmation speeds than Bitcoin.

According to data from CoinMarketCap, on April 19 a total of 400 LTC trading pairs are currently on 164 exchanges. Of these 164 exchanges, 86 have LTC records and are listed among the top 10 exchanges by volume. 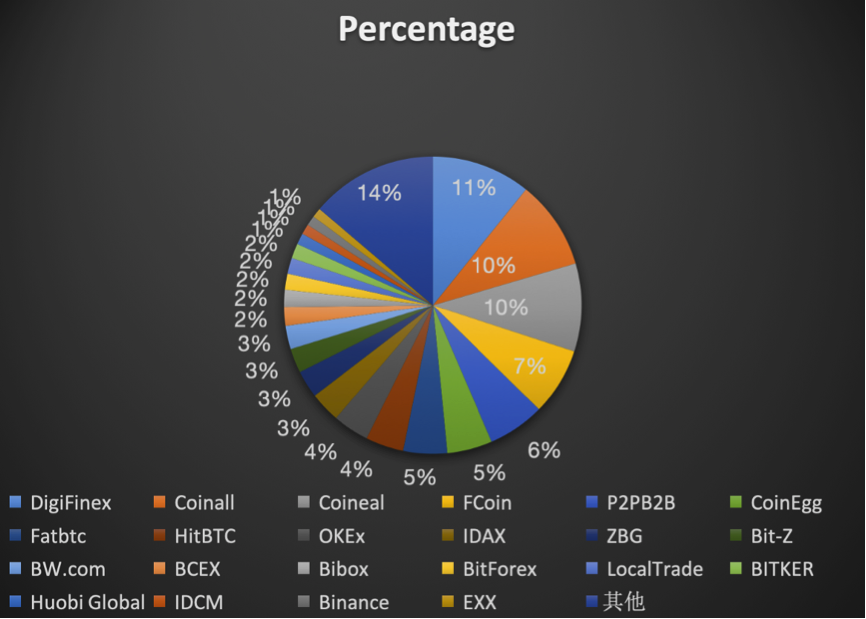 Code commits show a technology development and iteration of a project. Till April 19, Litecoin has a follower base of 3,292, showcasing a high level of interest among the community. Litecoin has reached 18,119 commits as of this writing, with 572 contributors. 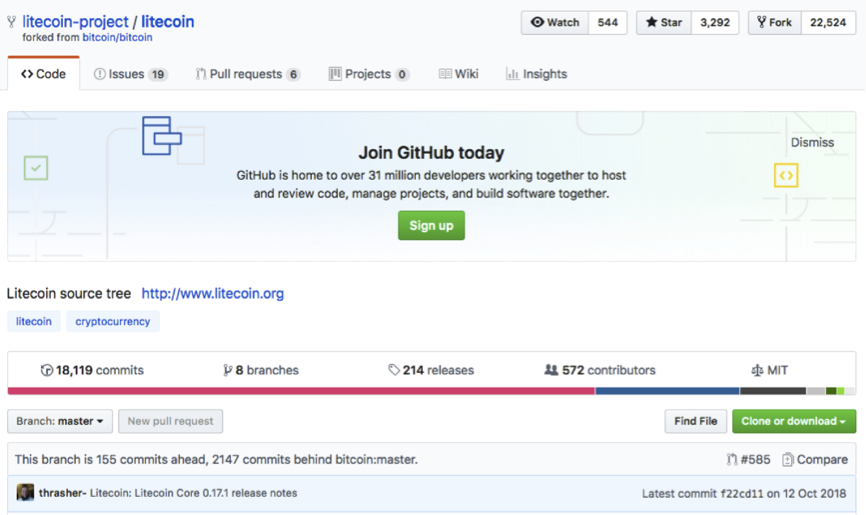 From the above chart, you can see that the number of commits of Litecoin between 2010 and 2011 stayed under 20, and saw a rise after 2011 above 20. However, from mid-2018 its code commits show only the downtrend to barely any commits in a few months, with the last commit occurring on February 20, 2018.

In fact, the commit numbers are highly correlated with the development of the Lighting Network technology. So far, Litecoin seems to have been stuck in a period of stagnation in its public chain development and is countering with competition from other emerging public blockchains.

Litecoin’s followers on Reddit, Twitter and Facebook totaled 73,891 (with the possibility of overlaps). Litecoin’s media attention pumped from the end of 2017 through early 2018, and has become flat since the latter half of 2018, which coincides with the bear and bull cycle switches.

Integrating Litecoin into the merchant’s payment system and other applications is a necessary step for achieving mass adoption. As a utility token, LTC’s offline payment ecology is a key part of the focus. According to the information on Litecoin.com, Litecoin has partnered with institutions, including cryptocurrency payment gateways, debit card institutions, other blockchain projects, and brick and mortar retailers. We will analyze Litecoin’s adoption from the perspective of its partner institutions, merchants and ATMs.

In May 2018, Wirex, a longtime cryptocurrency debit-card provider, announced that they would begin supporting Litecoin.

In September, Bitnovo launched a Litecoin debit card, which allows users to easily deposit cryptocurrencies and immediately receive euros that can be used at any traditional institution. TenX, another provider of cryptocurrency debit cards, announced plans for Litecoin’s future on its blog.

Hundreds of e-commerce sites and brick-and-mortar locations have accepted Litecoin payments in the past year, according to data compiled by cryptocurrency enthusiasts on Reddit. Litecoin merchants offer a wide range of goods and services, including art, clothing, food and beverage, precious metals, electronics, and other services across multiple industries. However, payment adoption is still very limited, with some stores closed due to various factors. Obviously, Litecoin still has a long way to go before becoming a large-scale application.

Crypto ATMs help users with fiat-crypto exchanges and crypto-to-crypto exchanges. As of April 19th, 2019, there are 4,607 crypto ATMs worldwide, spreading across 81 countries, most of which are concentrated in North America and Europe, covering 72.6% and 23.1% respectively.

Number of ATMs as of April 19, Coinatmradar 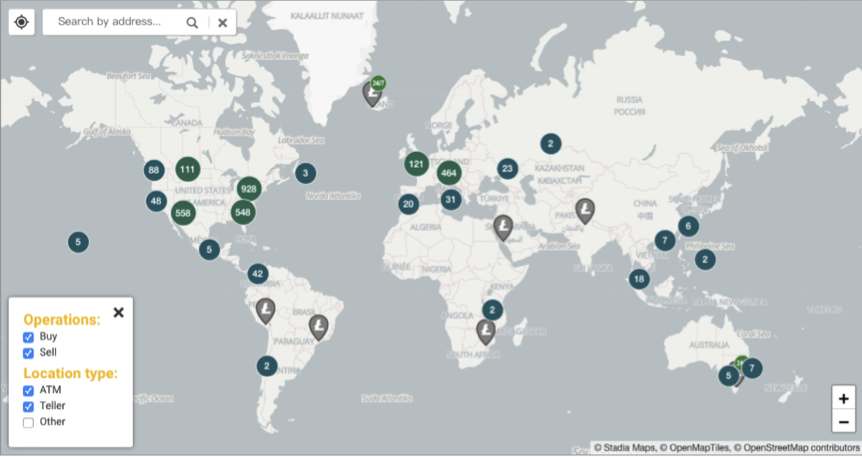 According to Coinmap.org, there are 14,650 brick-and-mortar stores around the world where Bitcoin is accepted as a payment method. These include merchants and ATMs that support Bitcoin payments. Though Litecoin’s payment ecology is constantly enriched and its ATMs are increasingly expanding, Litecoin is not the top choice for merchants in most cases due to the common consensus of the flagship cryptocurrency Bitcoin. 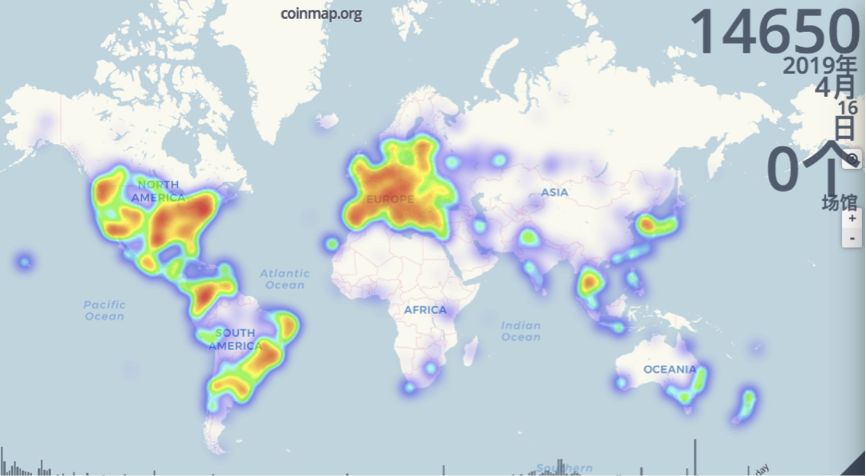 Using POW consensus, faster confirmation speeds and advanced technologies such as SegWit and Lightning Network give Litecoin the edge over Bitcoin and have helped it gain traction in the community.