Can Bitcoin Help Your Portfolio Survive a Financial Crisis? 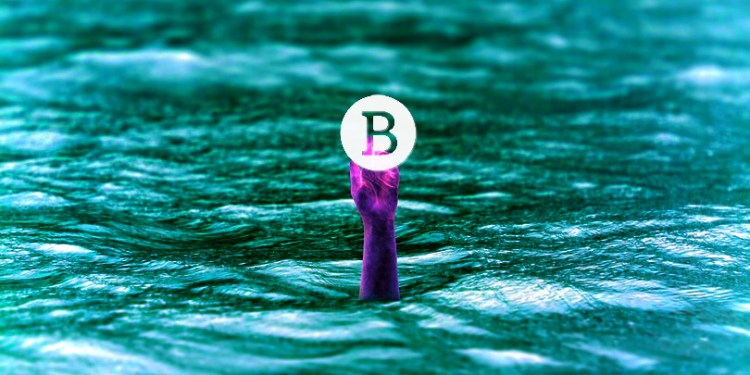 The US Fed delivered a 25-basis point rate cut as expected, the first cut since the financial crisis in 2008. Fundamentals such as earnings, economic data, Brexit and the US-China trade dispute are back in focus. Despite the fact that US equities have been outperforming other asset classes in general, with uncertainties lingering, the growth outlook in the US and even in the world remains gloomy. Because of that, central banks around the world seem to have an increasingly stronger stance on easing, and many consider that the monetary policy could easily create some new market bubbles if policymakers don’t find the right balance. In such a challenging investment environment, Bitcoin and major cryptocurrencies could hold a new strategic position as a hedge against stagnant global growth.

A Cut Ensures Against Downside Risks

The FOMC stated that “the labor market remains strong and that economic activity has been rising at a moderate rate.” However, the committee also believes that geopolitical developments and muted inflation pressures could hamper growth, therefore, a quarter percentage point cut is a measure to “insure against downside risks”.

Fed Chair Jerome Powell struck a more hawkish tone at his press conference than expected, dismissing the idea of starting a new monetary easing cycle, and said the US grew at a “healthy pace” in H1 2019 and the outlook is “favorable”. That means the monetary policy divergence between the US and the rest of the world remains deep.

While the Fed Chair seems as optimistic as he sounded, it looks like another story when we look at some different data, such as the inverted yield curve.

The following chart shows the yield differences between the US 10-year and the US 3-month over the past decade. In late 2006, the yield inverted for a few months, followed by the 2008 financial crisis and the US economic recessions (the grey area). After more than 10 years, we are back in the negative area.

Economists pointed out that the June reading is the second consecutive month of deterioration, partly attributed to the trade war between the US and China.

The lower global PMI was also in line with the data in the US domestically. Cass Freight Shipments Index measures freight expenditures and shipment volumes from the entire Cass client base. It broadly represents the manufacturing activity locally in the US. The index dropped -5.3% in June following a -6.0% drop in May, back to the level where the China stock market bubble burst in 2015–16.

The Role of Bitcoin

In times of turbulence and uncertainty, Bitcoin could be a safe-haven asset while mainstream markets tumble. Its uniqueness and distinctive properties make it unlike traditional assets. Yet, Bitcoin shares a lot of qualities with gold, the oldest continuously used form of money in the world, and that could potentially open a new dimension for investors to hedge against financial crises, or as an investment over the course of normal economic cycles.

Unlike the currencies in the modern world, gold can’t be printed out by central banks. Even with advanced technology, gold can’t be created chemically. Part of gold’s value is essentially tied to its supply. Since the times of ancient Egypt and ancient Rome, and even well before, it has been accepted as a reliable store of wealth.

Similarly, Bitcoin has a total fixed supply of 21 million units. Data shows that as of August 2019, over 85% of them have been mined and in circulation. New bitcoins are created when a sufficient number of mining nodes have verified a block of transactions. The miners would be issued a reward in the cryptocurrency for each block mined.

By doing so, more Bitcoin is put into circulation. Bitcoin’s mining reward is halved every 210,000 blocks to ensure a steady supply of Bitcoin. This happens roughly every four years. May 2020 will see the next reduction in miner payouts. This mechanism makes Bitcoin an ideal anti-inflationary asset.

To have a clear picture of how Bitcoin could hedge against major risks and stagnant growth, let’s review how Bitcoin has performed in the past crises.

In March 2018, US President Donald Trump first asked the United States trade representative to investigate applying tariffs on $50–60 billion worth of Chinese goods, stating that the proposed tariffs were “a response to the unfair trade practices of China over the years”. As a response, the Ministry of Commerce of China imposed tariffs on 128 US-imported products, such as aluminum, airplanes, cars, pork, and soybeans. Over the past year, the two countries have put additional tariffs in place. After multiple rounds of talks and discussions, the trade dispute between the two is still unsolved. On August 1, 2019, Trump announced that an additional 10% in tariffs will be levied on $300 billion in Chinese goods. 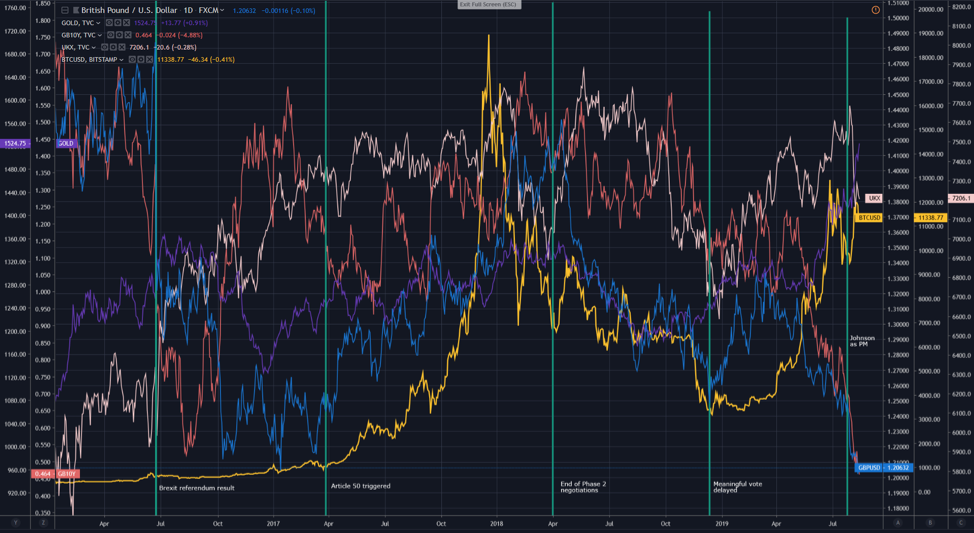 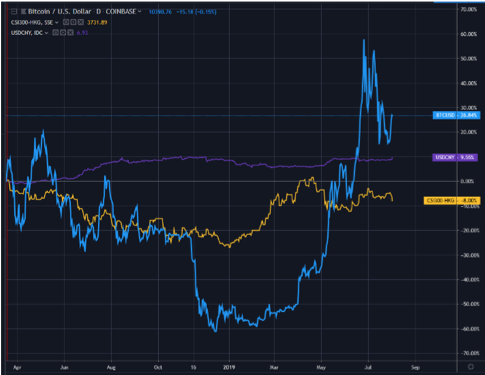 Bitcoin (blue line) has easily outperformed USDCNY and CSI300 since the beginning of the trade war. Bitcoin rose about 26% since the trade dispute ignited in April 2018, while the CSI300 index gave up more than 7%.

In June 2016, the UK held a referendum on whether to leave the European Union. Over 51% of voters voted to leave, resulting in a ripple effect across financial markets and all asset classes. The UK government invoked Article 50 of the Treaty on EU, starting a two-year process which was expected to have the UK leave the EU by the end of March 2019. With Boris Johnson replacing Theresa May as the new prime minister, the likelihood of a no-deal Brexit is now significantly higher. 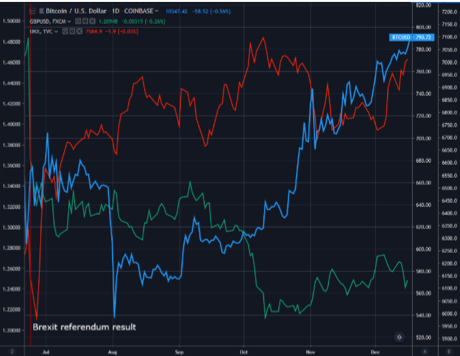 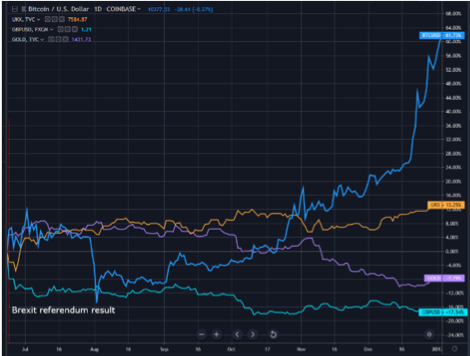 The above charts show the performance of Bitcoin after the Brexit referendum result was announced up until January 2017. Again, Bitcoin (blue line) surged more than 60% in that period, while the FTSE100 rose just 13%. Gold and GBPUSD were down about -8% and -17% respectively.

The People’s Bank of China surprised the market on August 11, 2015 by devaluing the yuan by almost 2%, citing the move could let the Chinese currency be more “market-driven”. Societe Generale said China’s foreign reserve has dropped as much as $150 billion in August alone. The central bank’s action was then followed by a massive sell-off in the Chinese equities markets. Bitcoin (blue line) once again acted as a crisis hedge. From August 2015 till January 2016, the cryptocurrency outperformed the Shanghai Composite, the Hang Seng, and onshore yuan. 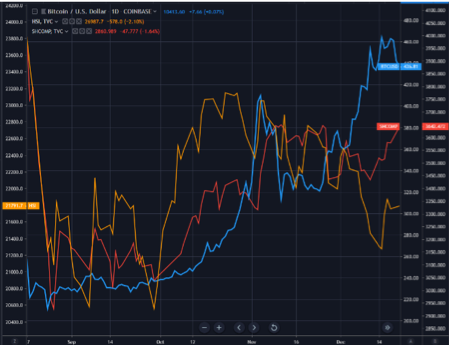 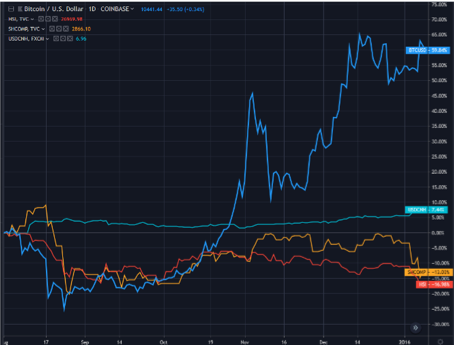 In this ever-changing economic and investment environment, finding the right instrument to hedge against risks is especially important. Although Bitcoin is still far away from being a widely accepted investment in the markets, its unique properties and nature have allowed the cryptocurrency to increasingly draw investors’ attentions, from individuals to financial institutions, and this could open a door for the finance industry as a whole to further explore the possibility of strategic adoption of Bitcoin. We have seen Bitcoin react properly against crises in the past, and we will continue our study on how Bitcoin would act in a volatile market and an ultra-low inflation environment.

Disclaimer: This material should not be taken as the basis for making investment decisions, nor be construed as a recommendation to engage in investment transactions. Trading digital assets involves significant risk and can result in the loss of your invested capital. You should ensure that you fully understand the risk involved and take into consideration your level of experience, investment objectives and seek independent financial advice if necessary.