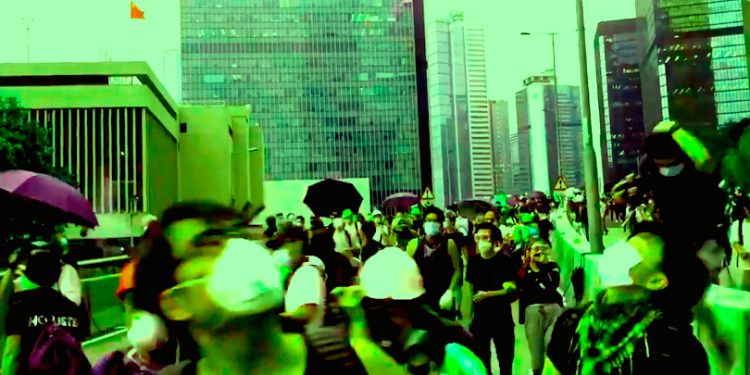 Amidst ongoing violence in Hong Kong, HSBC, one of the largest banks in the world, is shuttering a corporate account used to bankroll protest activities in the region, the South China Morning Post reports.  The account is allegedly being used to crowd source funds for Spark Alliance HK, which covers legal and medical fees for protesters.

Areas of the semi-autonomous Chinese territory have been under seige and overrun by violent clashes as the police struggle to eradicate protestors who are fighting against the erosion of their rights under Chinese rule.

The anti-government movement turned bloody at Hong Kong Polytechnic University where protestors barricaded the campus to stop the police from entering, but now, after a showdown, trapped students are trying to escape the campus which is crippled by bombs, fire and violence.

"This is a warzone – it's supposed to be a university."

These are the scenes @mattfrei was faced with when he made his way into Hong Kong Polytechnic University, where violent clashes between police and activists have been taking place. pic.twitter.com/tbuKckUFfw

Crypto influencers are pointing to Bitcoin and other digital assets as a financial solution to the censorship of authoritarian regimes, calling the technology integral to financial liberty.

This is why Bitcoin was created, for making the transactions they say you can't make.

In late October, Bitcoin researcher and software developer Pierre Rochard described Bitcoin as a tool for overthrowing the status quo and introducing a new monetary system.

Earlier that month, Anthony Pompliano, the co-founder and partner of Morgan Creek Digital Assets, outlined the advantages of a censorship-resistant currency.

There’s a whole bunch of different value props that Bitcoin brings to the table. Part of the beauty of Bitcoin is that it’s valuable to different people for different reasons. If you’re in a country where you’re worried about someone seizing your assets, all of the sudden Bitcoin’s non-seizabilty becomes very attractive.

If you’re worried about living in an area where you’re getting censored, the non-censorability becomes very attractive.”

When you’re worried about your assets being seized or becoming inaccessible to you, Bitcoin’s non-seizability becomes very attractive.