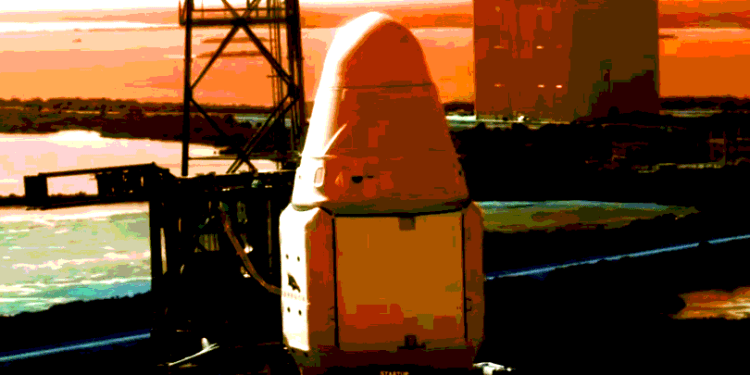 The payload included 5,700 pounds of supplies along with the autonomous free-floating robot assistant dubbed ‘CIMON-2’, genetically enhanced mice and a blockchain hardware wallet that can power transactions.

SpaceX missions, which ship cargo to the space station for NASA, facilitate a long list of technological and biological experiments on the orbiting laboratory that has hosted over 3,000 scientific investigations, according to NASA, with participation from more than 100 countries.

The latest slate will test therapies for heart disease, explore fire in space, probe theories of gravity and introduce blockchain.

Blockchain platform SpaceChain, which is developing the world’s first open-source blockchain-based satellite network that will allow users to build and run applications in space, announced that its blockchain hardware wallet technology is on its way to the space station aboard Falcon 9.

According to the announcement, the deployment is the first technology demonstration of blockchain hardware on the ISS.

“Once activated, the payload will demonstrate the receipt, authorization, and retransmission of blockchain transactions, creating ‘multisig’ transactions that require multiple signatures (approvals) to complete, increasing the security of the operation. It is currently expected that the testing of this payload will be completed by early 2020.”

Zee Zheng, SpaceChain co-founder and CEO, says the company will work with financial service providers and fintech developers, as well as IoT service providers, to accelerate enhanced security for digital assets that are vulnerable to cyberattacks and hacking when hosted exclusively in centralized terrestrial servers.

“Blockchain is the next major disruptor in space. SpaceChain addresses security vulnerabilities for financial systems and digital assets in the growing digital economy. Through integrating technologies, new paradigms that were once beyond reach can now be created and add exciting elements in the New Space Economy.”

Billionaire venture capitalist and Bitcoin bull Tim Draper, a backer of both SpaceChain and SpaceX, joined SpaceChain as an advisor last year.

“SpaceChain’s foray into space will successfully create a decentralized environment that facilitates advances and collaborations at a fraction of the cost typically associated with the industry.”

The SpaceChain team plans to use blockchain-based tokens to fuel the space economy. The tokens will act like tickets that users purchase and upload in order to execute space-based apps and store data on the SpaceChain network.

SpaceX’s Falcon 9 rocket with SpaceChain’s tech onboard is expected to reach the space station on Sunday.