Countdown to the Bitcoin (BTC) Halving: Do BCH and BSV’s Halving Data Serve As Indicators for the Big Event?

by Johnson Xu
in HodlX 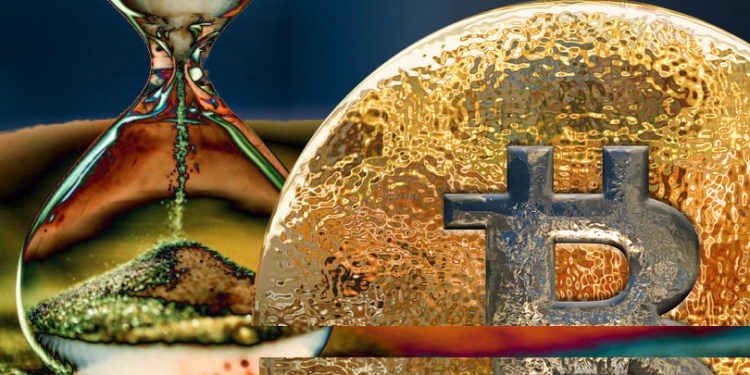 As the industry moves closer to the Bitcoin third halving, and the COVID-19 pandemic still disrupts the global economy, a ripple effect is spreading across the global financial market. The halving coupled with a weak Bitcoin price is forcing an unprecedented cleanse to rebalance the network, making it efficient and healthy. Hashrate reduction has been traditionally seen as a negative indicator which reflects weaker network security, however, this is not always the case. Sometimes It’s a healthy correction to reset and reduce wasteful mining.

The scheduled halving is putting the SHA-256 miners under significant pressure as the Bitcoin network will undergo its major event in less than 30 days. Since Bitcoin Cash (BCH) and Bitcoin Satoshi Vision (BSV) underwent their scheduled network halvings on April 8th and 10th, respectively, reducing the block reward from 12.5 to 6.25, we can take a closer look at the BCH and BSV’s market before and after to shed some light on the topic of block reward halving.

BCH and BSV chains both experienced significant network hashrate reductions due to the halving, yet prices remain relatively stable

The price of BCH and BSV remained in a stable range prior to the halving and post halving. Both chains’ network hashrate dropped from 3~4EH/s to sub 1EH/S at its lowest point. Thanks to the BCH and BSV’s difficulty adjustment algorithm, the network did not experience a prolonged spike in the block time.

The marginal cost of creation of 1 unit of the respective coin has been calculated, serving as a benchmark to understand how healthy a miner’s profit margin is. The healthier the miner’s profit margin, the lower the selling pressure on miners trying to recoup the costs of generating the blocks. 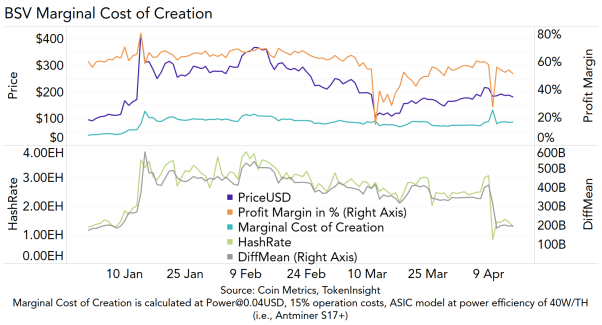 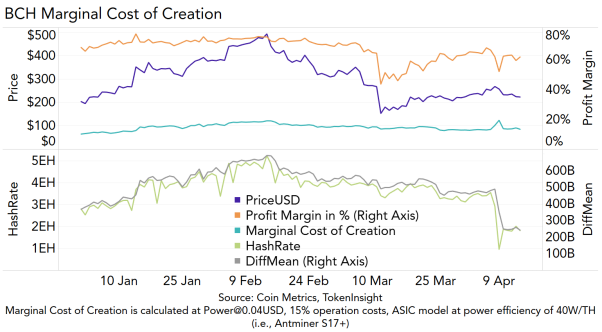 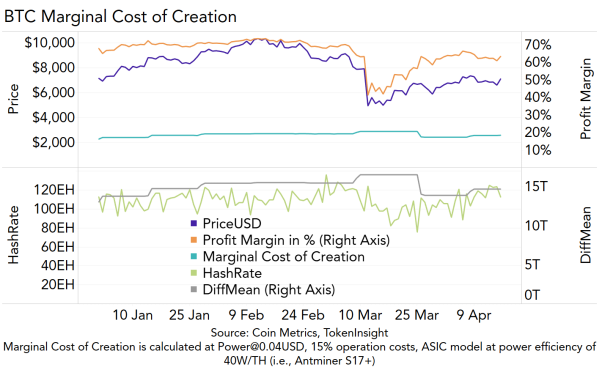 As we are head to the third Bitcoin halving, we expect the Bitcoin network to see a significant reduction of the network hashrate, wiping out at least almost the entire old generation SHA-256 ASICs such as Antminer S9s immediately after the event due to the significant increases of the cost of creation based on the current network difficulty and Bitcoin price. There is only a 20% profit margin for miners who are running S9s at present with $0.04/kW, 15% operation costs. Unless the miners can operate at sub $0.02/kW electricity, which is extremely difficult to find, we believe the majority of the S9s will be wiped out and exit the Bitcoin network permanently within one to three months post halving. 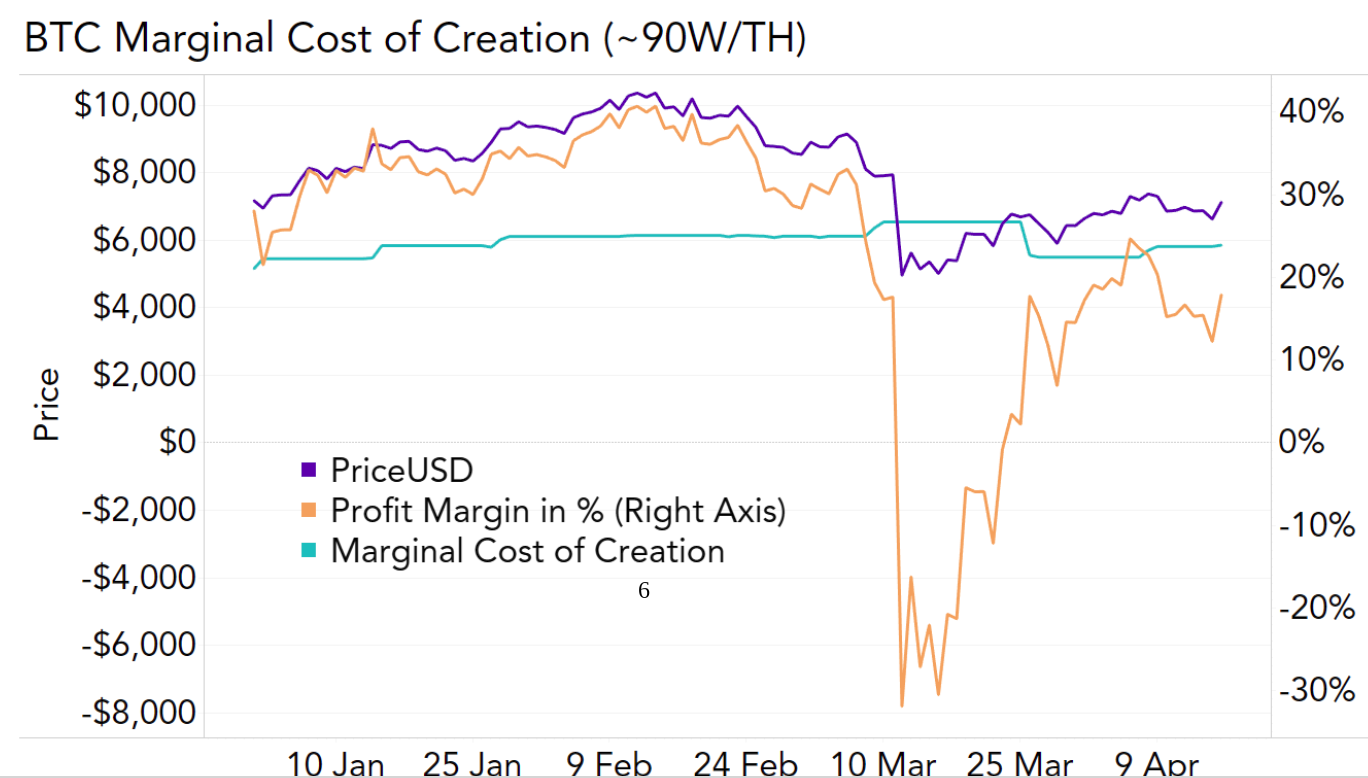 The cost for a consistent 24-hour 51% attack decreased significantly, showing its weakest sign for both chains year to date, and it is practically possible to perform a 51% attack on either BCH or BSV chain. 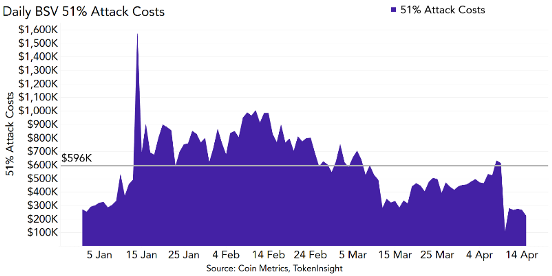 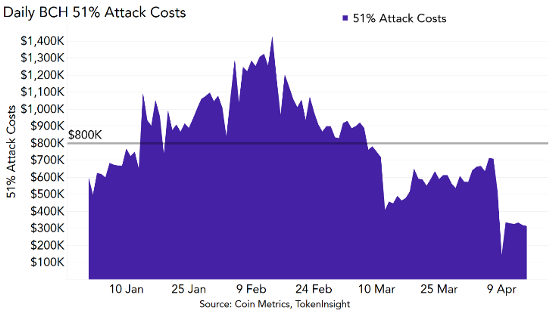 The theoretical 51% attack costs for both BCH and BSV chain have gone back to the January 2020 level, and more than halved the the current YTD average.

As the BCH (2EH/s), BSV (1.5EH/s) respective network hashrates account for only a small fraction of the Bitcoin total network hashrate (100EH/s), it is easier than ever to perform a 51% attack on either chain by diverting enough hashrate from the Bitcoin network to do so.

The Daily MRI Tells a Vastly Different Story on BTC, BCH and BSV Chains from the Perspective of a Miner 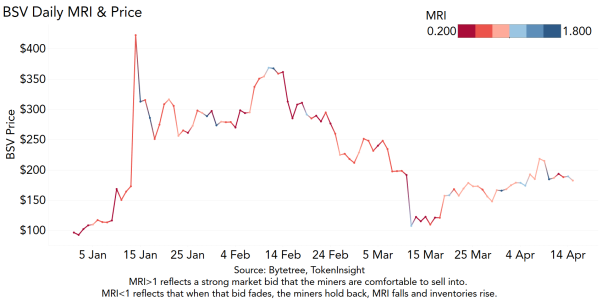 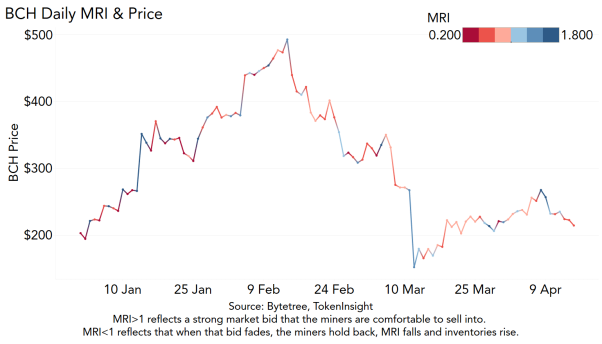 In terms of the BTC market, it is the healthiest among the three chains from the miners’ perspective, with a well-balanced position and comfortable selling into the market (blueish data points) and holding back on the inventory (reddish data points) based on the actual market condition. It is also leaning more towards a neutral perspective as there are less extreme values (indicated by the darkness) than the BCH and BSV figures.

Since the MRI merely serves as one of the indicators in the market, it might not be effective when evaluating the BCH and BSV chains due to the possible highly manipulative nature of the BCH and BSV market, liquidity and other issues.

Due to the insignificance of the BCH and BSV networks relative to the BTC network, we believe the BCH and BSV halvings cannot serve as a benchmark for the BTC halving. It is highly suggested to look at various other indicators, metrics, and analysis to form a comprehensive overview of the market.

As we move closer to the third Bitcoin halving, market volatility is expected in the near future while the Bitcoin network experiences a chaotic period in the short term to adjust itself back to an equilibrium post halving, and ultimately achieves a more efficient blockchain network.