by Mark Brown
in HodlX 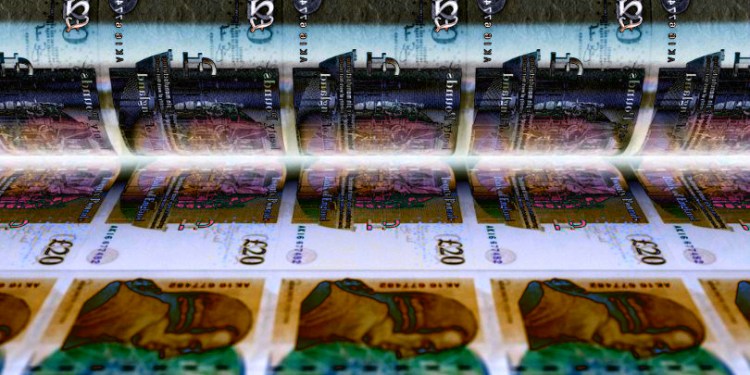 British printer De La Rue is sending alarming signals to investors, and coming close to entering administration, despite several management re-shuffles. Turnaround specialist Clive Vacher is now at the helm, and may represent the last hope for the worried staff inside one of Britain’s oldest printing companies. But as much as Clive Vacher may have proven resourceful in the past, he now has two major crises to solve: the coronavirus-induced recession and De La Rue loss of vision.

De La Rue, the famous banknote printer based in Basingstoke, is in the ropes. For the past decade, the century-old firm has been entangled in investor revolts and poor results, to the point that staff is now fearing for their future. Times reporter Alex Ralph writes,

“The new chief executive of De La Rue plans to deepen the cost-cutting at the troubled banknote printer, including imposing job losses, as he seeks to end years of turmoil. Clive Vacher, 49, who was brought in from Dynex Power to replace Martin Sutherland in October, has unveiled a three-year revival plan, which puts the focus on to polymer notes. The plans were issued [February 25th]…”

De La Rue is specialized in secure printing, issuing official documents such as security stamps, security components for graphic surfaces, banknotes and identification documents. The banknote market has undergone slow but severe turbulence, with cash market shares being slowly nibbled away by alternative payment methods. However, this doesn’t seem to have affected other producers on the market, which have found ways to adapt.

De La Rue has not, and must now contend with the coronavirus crisis, the consequences of which are not yet fully known, despite probably no longer having the strength to do so.

What is a problem for the competition has turned into a crisis for De La Rue, with problems feeding problems in what seems a never-ending cycle. Alex Ralph adds,

“The day after the new chief executive of De La Rue unveiled his turnaround strategy for one of London’s oldest listed companies, the shares were back in the red. So much for the banknote printer’s rally – by a fifth – after the plans were announced alongside trading update on Tuesday.

Last night the shares closed down 4½p, or 3.1 per cent, at 143p. It was, perhaps, a salutary lesson Clive Vacher, 49, who was parachuted in as chief executive in October to rebuild investor confidence and the bombed-out share price.”

Unanticipated market disruptions led to lower sales, which in turn led to reduced available funds for research and development, which in turn led to loss of competitiveness on the market. The United Kingdom, for instance, was unable to rescue the limping printer, when new post-Brexit passports had to be ordered, and had to turn to a French supplier to meet requirements.

Inability to form a strategy seems to be at the root of all of De La Rue’s predicament, and none of the management teams seem to have gotten anywhere close.

Other similar companies have suffered similar fates, seeming too big to fail before slipping into oblivion. Recent examples are from Flybe, the British airline which, after decades of hyper-rapid expansion, ceased operations at the beginning of March 2020.

The unstoppable rate of external acquisitions left it vulnerable and cash-hungry, to the point that Flybe entered administration before the travel-ban was in global effect, from the first effects of the coronavirus crisis. The Six Flags entertainment group also collapsed recently, despite a management shuffle, due to excessive acquisition ambitions, a poor safety track record, and exposure to fluctuations in entertainment tourism.

The looming shadow of coronavirus may eventually prove to be the straw to break the camel’s back, as De La Rue made the unlucky choice to invest in polymer plastic banknotes, which may be sidetracked in coming weeks, for public health concerns.

Despite banknotes being deemed safe to use during the crisis, plastic has been identified as one of the best vectors for contamination. Additionally, the global economic slump induced a reduction in demand for currency, with no end in sight so far. While healthy competitors may have the reserves to outlast the crisis, it isn’t clear whether De La Rue has equivalent stamina.

Astounding silence is to be heard from De La Rue, so far, who is virtually nonexistent in the public sphere. According to Grace Keith, managing director for Caliber Corporate Advisers,

“In any moment of crisis it’s imperative that a company clearly state what has occurred, what is being done to address the issue and provide a timeline of when to expect further updates.”

Regardless of what technical alterations have been implemented by the new management team, none will work without addressing step one of any turnaround: building trust – something difficulty achieved without speaking.

As times are about to get harder for everyone in the wake of the global lockdown, De La Rue may have no other option than last-ditch efforts, such as cutting back on staff (a fatal move in an industry where know-how is everything) or cutting corners on its highly complex supply chain, which will deplete the printer of its lifeblood: customer trust.

De La Rue has brought itself to the brink of its capacities, in a classic business nightmare scenario: letting its options shrink till none are left. Flybe could have sailed through the ongoing crisis, had it not stretched its capacities far beyond reasonable limits. Indeed, any firm can handle a problem, none can handle 10. When a firm has nine ongoing issues, it is no longer a question of whether it is going to survive, but when the fatal tenth will arrive. The current global coronavirus may prove to be just this for De La Rue: the crisis without which it could have barely survived, but which fatefully came at a moment when it had run itself out of options.