by Aliaksandr Dabranau
in HodlX 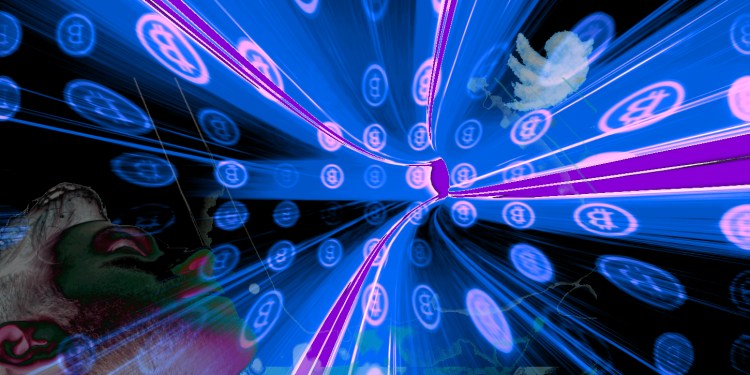 Crypto Twitter is a real force. Everyone who matters in the crypto industry is active on Twitter, and many of us are used to finding out the latest news on the platform. One can even assume that opinion leaders directly influence coin prices. A new study by BDCenter Digital reveals whether this is true.

Do influencers’ tweets really have an impact on the market? To find out the answer, we analyzed over a million tweets by 100+ influencers.

Crypto Twitter is a densely populated realm, with hundreds of influencers on various scales. It wouldn’t be possible to study them all, so we selected the influencers for our study based on several criteria.

I have accepted an advisory position with @China_Zombie to help them with the CZCOIN ($CZ) creation and promotion. I will be shilling them heavilly. You have been warned. I want no flack. Thank you. pic.twitter.com/w0a4vJe8Lp

The resulting list included 123 accounts with a total of 30 million followers. Between January 2018 and June 2020, these influencers posted a total of 1,300,000 tweets. Out of this sea of messages, we selected those that mentioned coins from the CoinMarketCap top 200 – 138k mentions in total.

The portrait of a perfect influencer

An interesting fact – just 30 influencers account for 70% of all coin mentions. 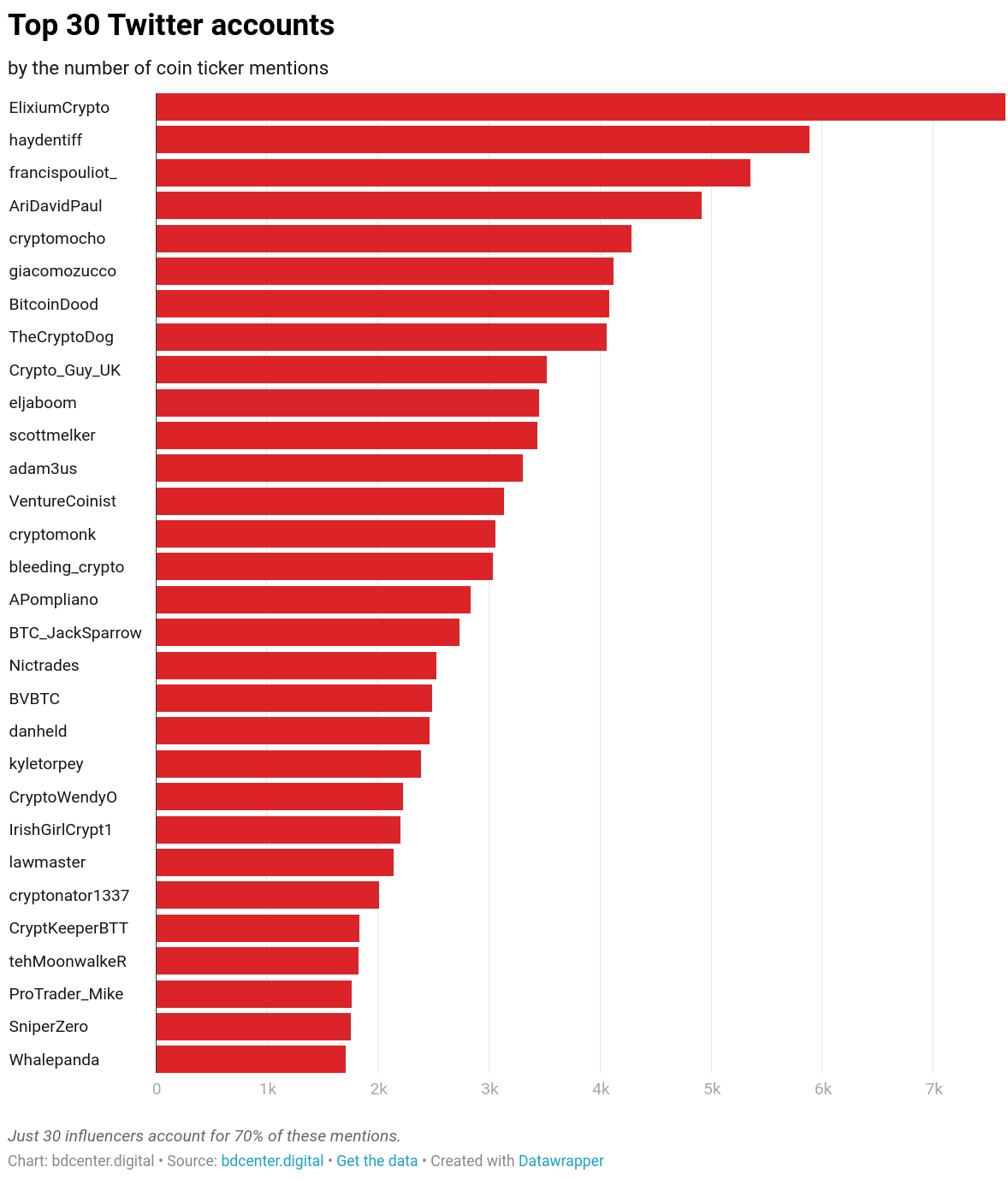 These 30 opinion leaders have two very important traits in common.

To calculate engagement, we divided the overall number of reactions to tweets (likes, comments and retweets) by the number of tweets mentioning coin tickers.

If you are a startup owner, these numbers are significant. They can help you choose the most suitable influencers for promoting your business. Engagement rate is crucial; a large number of comments and retweets can create a discussion and much-needed hype around a coin. And as we’ve discovered, mid-sized accounts can have a far more active and engaged audience than “whales.”

Influencer marketing rates partly depend on the number of followers. Therefore, by contracting opinion leaders with a smaller but more engaged audience, you can both save money and get better results than when working with larger and more expensive Twitter accounts.

Opinion leaders influence their followers’ sentiments and expectations – but what about coin prices?

At first glance, the charts plotting the number of a coin’s mentions and its price look very similar – such as in the case of BNB. 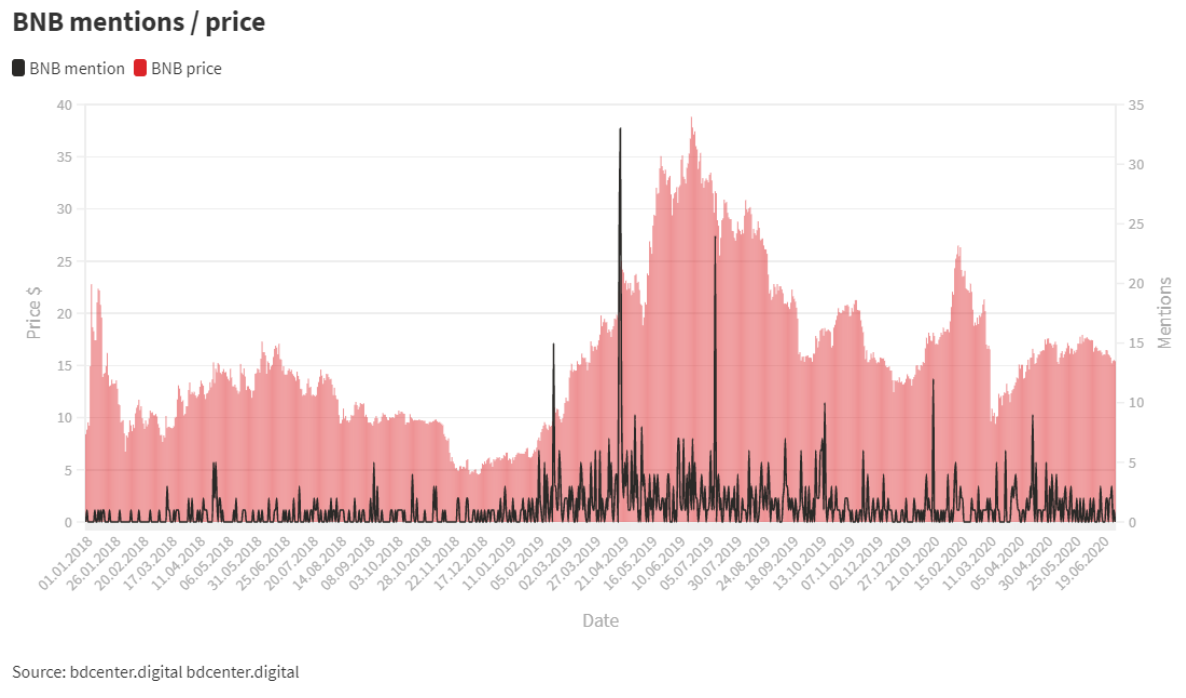 This is only an illusion, however. Our correlational analysis demonstrated that the price of a cryptocurrency doesn’t depend on how often influencers tweet about it. Rather, the link is inverse. Opinion leaders tend to mention a coin more often when its price fluctuates.

As you can see, the correlation is strong in the right area. But in the left area, it varies from 0 to 0.2, which means a weak correlation.

Of course, this doesn’t mean that collaborating with influencers can’t help to increase the price of a token. It’s worth reminding that our study focused on the 200 largest coins by market cap; for smaller assets, things can be quite different.

Crypto Twitter remains a key channel of blockchain marketing – even if the opinion leaders don’t directly impact prices. The key to success is selecting the right influencers for each project. As it turns out, the number of followers is far from the most important factor.

Aliaksandr Dabranau is a researcher and communication manager at BDCenter Digital – a growth marketing and consulting agency for blockchain projects, which has been conducting research on crypto since 2011. You can find more information on the official website.