Into the Unknown: Why Traders Are Cautious After the Launch of Ethereum 2.0 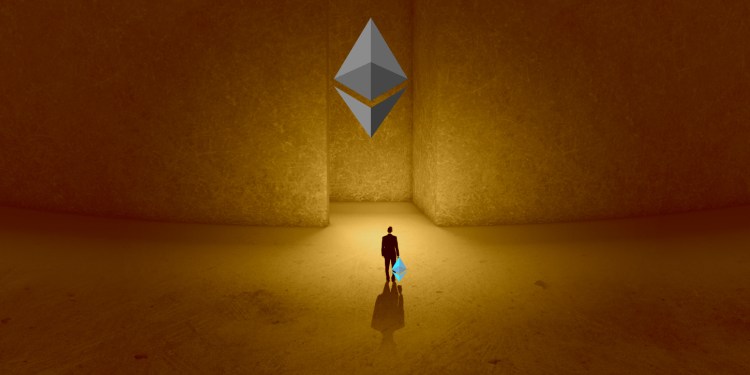 Its arrival has been long-awaited in the crypto landscape, but Ethereum 2.0 entered the market to a muted response amid significant levels of volatility.

ETH, the world’s second-largest cryptocurrency, is up by around 350% since the start of 2020, and on December 1st, the most significant upgrade to its network blinked into existence, promising thousands of faster transactions and an altogether greater level of usability.

The news of Ethereum 2.0 may have been enough to spark widespread optimism about how it could affect the value of the popular coin, but instead, its December launch came and went with ETH experiencing significant drops in value.

The launch of Ethereum 2.0 came on the same day that Bitcoin reached new all-time-high values. Shortly after BTC tapped on to its highest ever price, the cryptocurrency dropped by 9% in a matter of hours, with ETH experiencing a deeper correction of 11% during the same time frame. As we can see in the chart above, Ethereum’s fall resembled a cliff edge before a small recovery took place leading into the 2nd of December.

So why did such a disappointing correction take place on a momentous day for Ethereum? And will Ethereum 2.0 still drive greater growth in 2021 and beyond? Let’s take a deeper look into how 2.0 can shape the future of Ether.

Despite Ethereum spiking before the December 1st launch of 2.0, the cryptocurrency retreated under $600 on the day of the launch, later extending its losses towards the $560 line of support.

Interestingly, Santiment has shown that social media mentions of Ethereum soared on the release of 2.0, with 982 mentions on the day, according to FX Street. However, peaks in social volume are often dismissed by market commentators because it indicates that there may be irrational growth in confidence over the cryptocurrency’s future. This means that high social volume can often lead to price corrections over the following days and weeks.

Ethereum’s daily active deposits also fell following the launch on December 1st. At present, active deposits hold around 8,300 ETH, representing around an 80% drop from almost 44,000 ETH prior. This has caused more selling pressure as Ethereum dips under $600.

As a result, on-chain data is showing that the amount of ETH sent to exchanges fell heavily following the launch. The exchange inflow indicator shows the number of tokens to exchanges has dropped from around 180,800 ETH on December 1st to 32,200 ETH 24 hours later – a huge 82% drop.

It’s worth noting that Santiment data has shown that both metrics above typically spike on weekends – increasing the likelihood of ETH’s price reversing the trend upwards before long. Additionally, the vast majority of long-term Ethereum holders are still evidently happy to hold their assets in light of the volatile start to December. In spite of heavy price fluctuations in the wake of 2.0 arriving, Ethereum is likely to find a level of calm in the coming weeks as investors wait and see which direction the cryptocurrency will take.

Disappointingly for ETH investors, ETH 2.0 sparked into life on the same day that Bitcoin stole the headlines for its all-time high rally. As the world’s most famous and dominant cryptocurrency, Bitcoin’s market cap is so significant that it has the power to haul other currencies on fluctuations based on its performance. As BTC investors became squeamish at the prospect of life after the all-time high, Bitcoin’s value fell and dragged ETH with it.

In the short term, traders are anticipating more deep pullbacks across the market or at least a level of consolidation. The futures market was heavily affected by Bitcoin’s earlier drops, which wreaked havoc across the derivatives market.

Speaking on the ramifications the market holds for Ethereum, one anonymous trader claimed that ETH will become an alluring prospect once a level of consolidation takes place. With the key support level of Ethereum remaining at $561 for the time being if a pullback occurs, the coming weeks will be a significant test of mettle for Ether.

“We’re getting some nice PA forming around Monday’s range and a nice tag of the weekly open. Wouldn’t be surprised if we consolidate around the midrange here for a bit. I’ll be interested in more longs once we trade above $620,” the trader and market commentator explained.

For investors who are looking to invest in Ethereum, a future pullback may make for a strong buy zone. With the arrival of PayPal making cryptocurrencies like Bitcoin and Ethereum more accessible, and the addition of more technologically advanced crypto exchanges to bring more confidence to the act of investing in crypto assets, the future looks bright for Ethereum 2.0.

With larger adoption and a much more fluid infrastructure, Ethereum 2.0 has the potential to mount its own race towards an all-time high price in the more long-term future. But as always, markets as speculative as crypto can always carry a sting in its tail for investors. Ethereum is still heavily dependent on Bitcoin for market growth, and with little evidence of a power shift taking place any time soon, ETH may still be looking to its older brother before embarking on a big bull run.

Dmytro Spilka is a tech and crypto writer based in London, United Kingdom. Founder of Solvid and Pridicto, an AI-based traffic forecast software. His work has been published in IBM, TechRadar, Bitcoin.com, FXStreet, CoinCodex, CryptoGlobe and CryptoSlate.