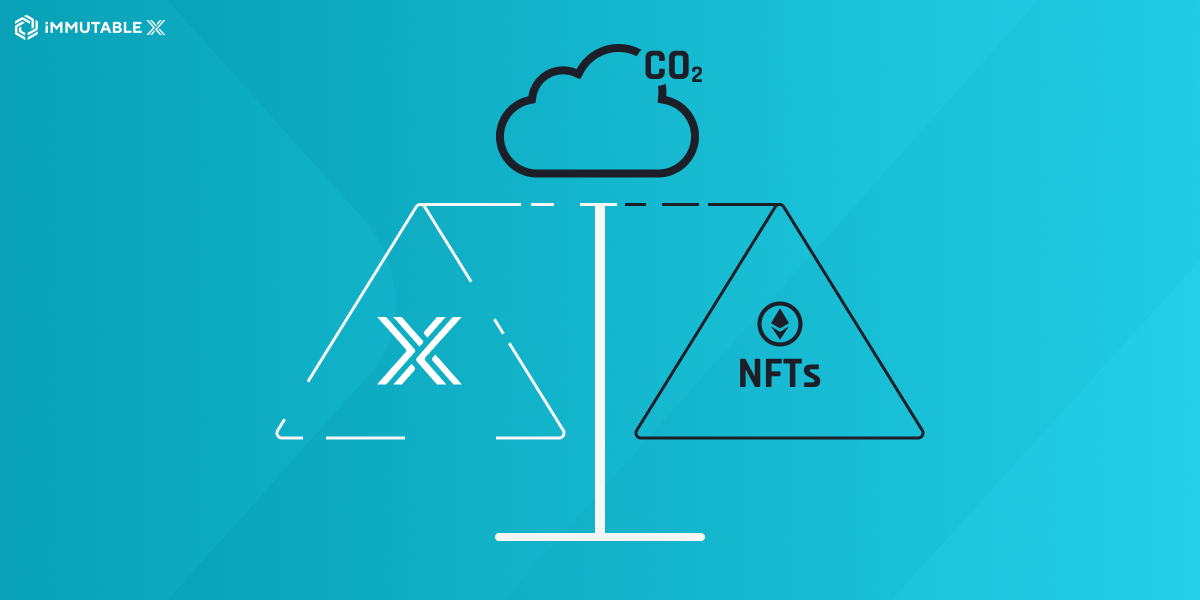 Lately, critics have raised concerns that creating and trading NFTs on the Ethereum blockchain will lead to a disproportionate increase in carbon footprint. This issue is tricky, and there’s a lot of misinformation out there. There are three key concepts pertinent to understanding this overheated debate fully, and one solution Immutable is proposing today.

NFTs can be created (aka minted), traded, earned, shared, gamed and collected – on marketplaces, on exchanges or in games. NFTs are interoperable. There’s now real value to users in the form of free-market economies and secondary markets of NFT marketplaces, previously locked in walled gardens or restrictive ecosystems.

‘Gas fees’ are the cost of using the Ethereum network. These fees are payments made by end users or applications on Ethereum to compensate miners for the work required to process and validate transactions on the Ethereum blockchain.

Ethereum gas fees fluctuate with demand, and have risen sharply, presenting persistent issues that make trading NFTs in a marketplace more expensive for users per trade. At the time of publishing, the average gas fee for one NFT trade on Ethereum was $36 (2/22/21 high source BitInfoCharts) if a user trades one NFT – irrespective of whether it’s worth $1 or $1,000. Importantly, Ethereum always uses the same carbon footprint in the short run: your NFT has the same environmental impact irrespective of the gas fee it uses (so lowering it doesn’t help).

The definition of ‘layer 2’ solution – layer 2 solutions refer to a popular method of scaling Ethereum while still retaining its security. Some L2s aim at fixing one or more scalability issues within the Ethereum blockchain. Immutable has built a dedicated L2 solution for scaling NFTs on Ethereum called Immutable X (an “exchange protocol”). Immutable X provides transaction scalability (up to 9,000 transactions per second), gas-free NFT trades and creations, and is fundamentally decentralized by relying on Ethereum – as opposed to a sidechain.

Any NFT that is created or traded on Immutable X is 100% carbon neutral.

Fundamentally, Immutable X scales Ethereum by taking up less of the network per NFT mint or trade while still retaining its security. Via zero-knowledge proofs, we take NFT trades or mints which normally occur directly on Ethereum, and instead have those Ethereum keys sign transactions which we batch into a compressed validity proof, and upload to Ethereum.

Secondly, Immutable will offset the carbon footprint of all NFT transactions (trading and creating) on Immutable X to zero

Immutable will buy carbon credits needed to offset the energy footprint of any NFT created or traded on Immutable X to zero. That means:

Immutable commits to continue covering the ongoing cost of carbon credits into at least 2025, as NFT volume on Immutable X increases through the growing ecosystem of marketplaces and games. Immutable is committed to carbon-neutrality for NFTs. We’re ponying up for the cost of carbon credits because we believe that NFTs (on Ethereum) are a net good for the planet.

We don’t want ecological unsustainability to stop the greatest shift in monetization power from incumbents to content creators the world has seen. On Immutable X, we envision the power dynamic increasing in favor of the NFT partners, developers, artists, creators, collectors, traders, while power consumption dramatically decreases.

We’re open to any and all who want to go carbon neutral on Immutable X.

[1] Measuring carbon emissions on the Ethereum blockchain requires some complicated math and depends on many factors. We took a top-down approach starting with the total energy consumption of Ethereum in a year, then calculated the percentage of Ethereum blocks Immutable X will consume. Our consumption estimate was uploading one Validium zero-knowledge proof to layer 1 every hour. Finally, we converted the energy consumption to carbon emissions based on the energy being produced in Australia.

[2] This is a similar calculation we’ve adapted for Validium to measure kgCO2 as measured by Digiconomist, and Memo Atken. We’re seeking accreditation with an alternative energy consultancy Edge Environment

[3] On a macro level, accelerating the trading and collecting of digital NFTs offsets the need for environmentally wasteful throwaway physical goods. By reducing the physical reproduction of certain physical goods, e.g. fast fashion, music, plastic games, and moving to more digital collection options like NFTs, reduces the bigger secondary sources of environmental pollution. Namely, mineral mining for plastics, production, supply chain, and transport pollution, with transport having the largest impact on energy consumption at 8,265 TWh in the US in 2019.

Immutable is an Australian-based company and market leader in scaling blockchain marketplaces. Immutable is creating a trading ecosystem that’s more accessible, empowering and rewarding people in digital ownership. Their goal is to make the whole world tradable on Ethereum.

Through the Immutable X platform, the company is bringing transparency to the opaque world of digital asset economies (NFTs, non-fungible tokens), providing sellers and buyers true digital property rights. Immutable builds infrastructure for marketplaces that developers can use to provide better value to their users, and to introduce free-market economies inside their games. Immutable X is the first layer-2 scaling solution for NFTs on Ethereum, with instant trade confirmation, massive scalability (at least 9,000 trades per second), zero gas fees – all without compromising user custody.

Immutable is responsible for launching the most successful blockchain Trading Card Game, Gods Unchained, which is headed up by Chris Clay, the former director of Magic the Gathering Arena.

Robbie Ferguson is co-founder and president at Immutable. He is a Thiel fellow, YPO member via University of Sydney and Knox Grammar school. Robbie co-founded Immutable with his brother and CEO, James Ferguson.