Justin Sun Acquired NFTs of Digital Zones, One of the Earliest NFT Projects, for $2 Million

TRON founder Justin Sun tweeted that he had recently purchased three Digital Zones editions – a series of NFT artworks created by artist Mitchell F. Chan – for 569 ETH (or $2 million) and donated them to APENFT Foundation. The NFTs he bought are edition 92 of series 7, as well as edition 83 and 84 of series 6. 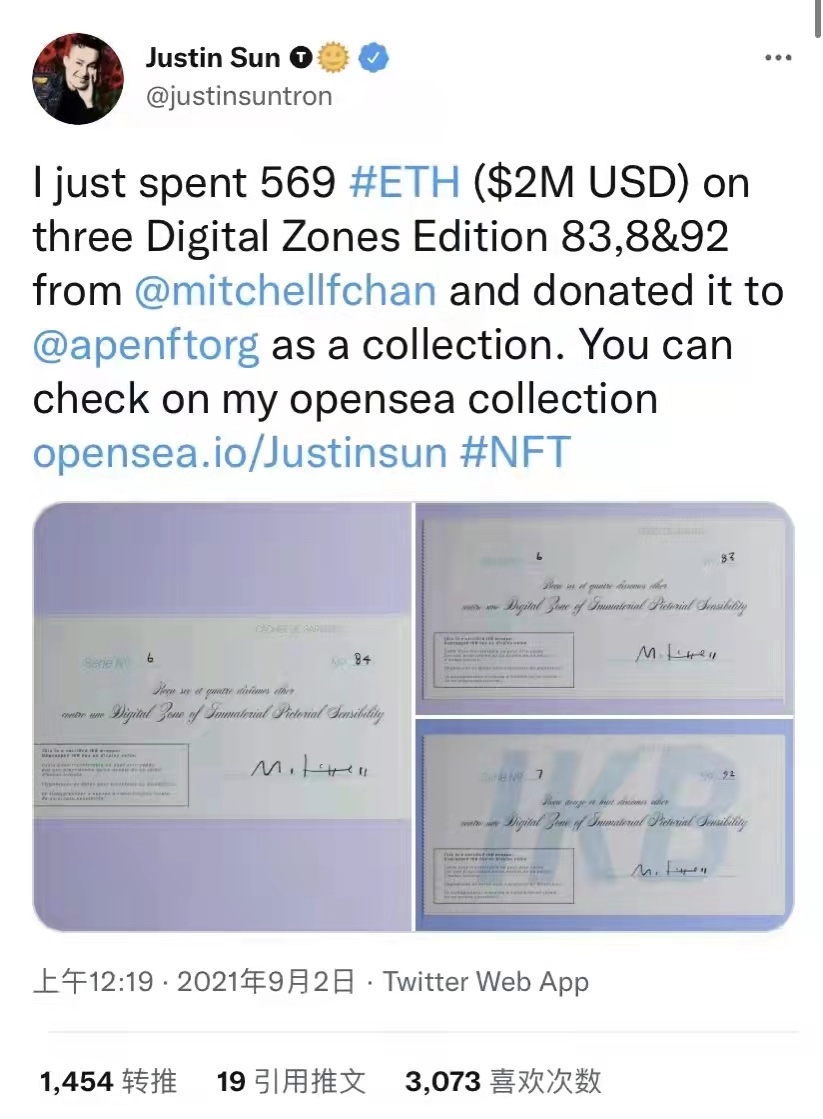 In tandem with the NFT, Mitchell F. Chan also wrote a detailed bluebook for his Digital Zones, and its limited hard copies will also be available. The bluebook details the history of Bitcoin, Ethereum and other digital assets and their relationship with Yves Klein’s artworks.

Chan produced eight series of Digital Zones, containing 101 NFTs in total, with ten for each series from series 1 to series 7 and 31 for series 0.

The art series Zone de Sensibilité Picturale Immatérielle by Yves Klein takes the form of receipts. Considered one of the earliest representations of conceptual and performance art, it gives its own interpretation on materiality, ownership and the ritual of exchange.

The work involved the sale of ownership of ‘virtual’ space, taking the form of a receipt, in exchange for gold – buyers who paid the gold as agreed on would obtain the receipt in return.

Nevertheless, Klein claimed that in order to truly own this art piece, the buyer had to perform an elaborate ritual by burning the physical ‘receipt,’ while the artist would throw half of the gold into the Seine. As Klein put it, tangible works derive from intangible concepts. In other words, intangible concepts are themselves artworks that may even outweigh tangible ones.

Above is a receipt that serves as proof of purchasing Zone de Sensibilité Picturale Immatérielle. The copy belongs to series n°1, zone n°02, and was purchased by Jacques Kugel on December 7, 1959. 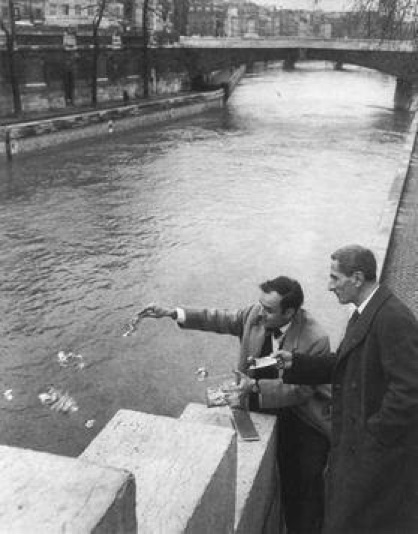 Above, Yves Klein and Dino Buzzati completed the ritual of the work on January 26, 1962.

When Chan first learned about Ethereum back in 2017, he realized that he could convert Yves Klein’s project into an NFT through blockchain technology and carry out creative experiments, thus taking a step further to non-visual and immaterial conceptual art. He then wrote a detailed bluebook for Digital Zones.

The timing of the works’ contract minting makes it one of the earliest NFT works on Ethereum, second only to Cryptopunk, and three months earlier than CryptoKitties.

More importantly, it made its debut at InterAccess in Toronto, which establishes itself as one of the first NFT artworks to be exhibited in a conventional art gallery. It is now widely received as the first ‘high art’ in the crypto art field.

With NFTs coming into the limelight and crypto practitioners vigorously pursuing ‘vintage’ NFT projects, the general public started to see the huge value of NFT of this kind, plucking Chan and his works out of obscurity a few months back.

Now, except for certain editions in series 0 owned by the artist, all editions in other series have been sold out. The price in the secondary market has exceeded 200 ETH and is still soaring. It is reported that Digital Zones edition 10 of series 0 will be put up for auction between October 14-21, 2021, at NativelyDigital, Sotheby’s.

As one of the veteran collectors in this sphere, since this March, Justin Sun has purchased NFT artworks by world-renowned artists such as Picasso and Andy Warhol, and crypto artists such as Beeple and Pak from both conventional and emerging NFT auction platforms including Sotheby’s, Christie’s and Nifty Gateway, with a combined cost close to $3 million.

Ownership of these artworks has been mapped onto TRON’s public chain through TRC-721 standard and will be permanently stored there and on the decentralized storage system BTFS.

By far, TRON has established a fully-fledged NFT ecosystem with robust hardware and software. As one of the top three public chains in the world, TRON now boasts over 56 million users, upwards of 2.4 billion transactions, and the highest circulation supply of stablecoins across the globe.

APENFT is backed by the underlying technology of top-notch blockchains Ethereum and TRON, with support from the world’s largest distributed storage system BitTorrent to deliver the mission of registering world-class artworks as NFTs on the blockchain.