What Is a DApp? Decentralized Applications Explained

by Saida Sarsenbekova
in HodlX 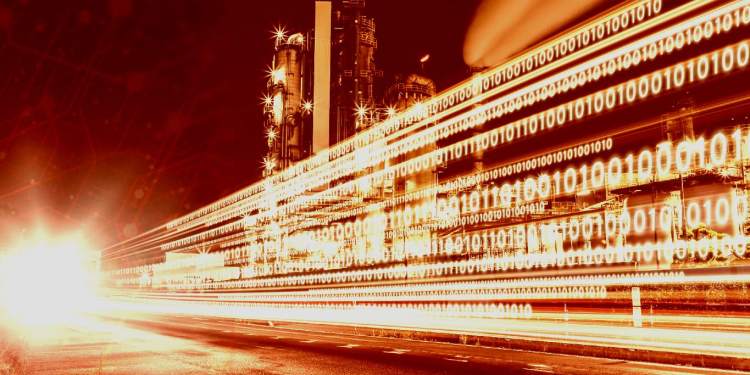 Since the 1990s, the internet has been transforming from an exclusive tool to a household necessity. It was groundbreaking when social media and other user-generated content replaced the dot-com bubble.

The World Wide Web went from people creating separate websites for their blogs and business to everyone having an opportunity to post on social media websites accessible to millions of users all over the world. This is why web 2.0 is also called the ‘social web.’

This includes protocols and tools like JavaScript, HTML and CSS that allowed complex software to operate on the web instead of using the traditional PC apps. This helped users to access many applications for free and avoid taking up space on their computers’ memory.

While interacting with web 2.0 technologies, many technically-savvy users started noticing some major issues. Corporations like Facebook have become the most powerful entities in the world, controlling the way people interact with each other, along with the way important information is shared with the public while collecting everyone’s personal data.

Depending on a company’s servers, many of the social media websites are vulnerable to malware and malfunctions. This year, the world was sent into a panic when Facebook’s servers went down, shutting off access not only to Facebook but also Instagram, WhatsApp and Oculus VR, which are owned by the company.

Many people were deprived of the tool that they use to stay in touch with their friends and family, as well as the source of most of the news and updates on world events. This occurrence demonstrated the main issue with the current web – its centralization.

The issues of web 2.0 are being dismantled and fixed by the next stage of the internet’s development – web 3.0, the ‘semantic web.’ It sets out to make the technologies more autonomous and intelligent by using artificial intelligence and machine learning. These technologies allow the internet to process information in a way that a human mind would – instead of following prescribed algorithms. It can use any and all data users share to learn and become more intelligent.

Then blockchain enthusiasts have taken it upon themselves to fix the issue with centralization by building decentralized and open-sourced applications. These new apps won’t be prone to malware attacks or downtimes just because one company’s server is down.

This is why the next-generation internet – web 3.0 – will be based on decentralized technologies. The transition to web 3.0 is a gradual and time-consuming process, but solutions like DApps are becoming the new normal.

What is a DApp?

Decentralized applications, or DApps for short, are built on blockchain networks and use smart contracts to create a safe space for users’ sensitive data. These DApps are open-sourced. They run on peer-to-peer networks, and no single entity is in control of them. Instead, participants of the network facilitate improvement by sharing more and more information, as well as providing the computing power necessary for its functioning.

All of the data and records of the DApp are kept completely public and transparent. The network is still secure, as it uses a cryptographic token that manages users’ private keys. 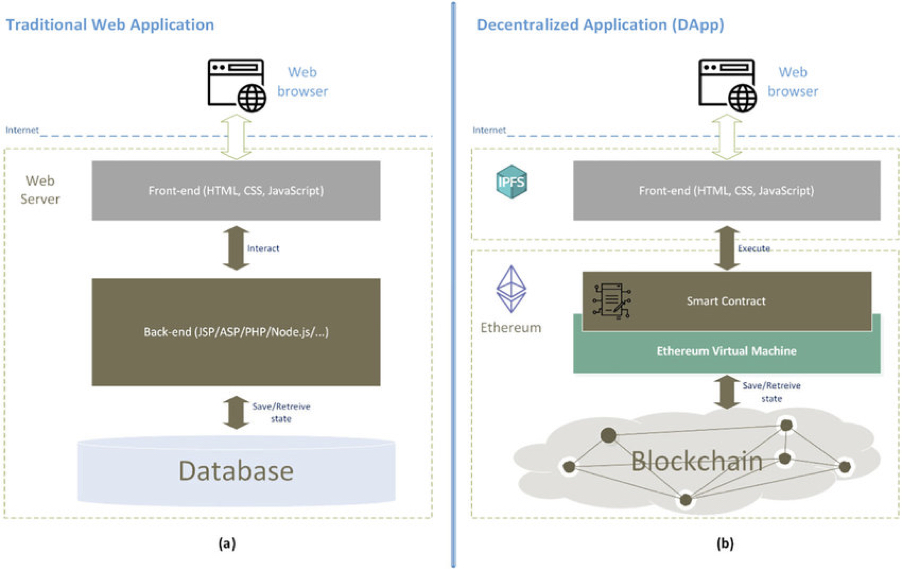 The main difference from the applications that we are accustomed to is the DApp’s backend code. In centralized applications, the backend code runs on a server that is controlled by a third party and interacts with the front end via JSON messages over HTTP.

For DApps, the backend code is run on a decentralized peer-to-peer network such as Ethereum. The blockchain interacts with the frontend of decentralized applications through APIs, like the JSON-RPC layer that is used for applications based on the Ethereum network. Here, the API doesn’t connect to any database, but instead, the wallet software triggers smart contracts that interact with the blockchain.

In our time, information is the most important weapon that can be used for financial and political gains. That’s why the first and the most important benefit of the DApp is its self-governing nature. The application not being controlled by a single entity means it’s resistant to censorship and informational control over the public.

Another important advantage of DApps is not having to go through the tedious process for fiat payments integration. Because DApps are made of smart contracts, crypto payments can be easily integrated into their basic functionalities.

Another big benefit of decentralized applications for the development of web 3.0 is their being open-sourced. This doesn’t only allow the code source to be audited and examined but also encourages developers to build bigger and greater DApps.

What are the use cases for DApps?

Most of the decentralized applications are built on the Ethereum blockchain. Their whitepaper has outlined three different types of DApps.

Steemit is a blockchain-based blogging and social media website. Here, users are rewarded for posting and curating content with STEEM tokens. Users themselves decide which content is rewarded by interacting with it. The platform has over 1.2 million users. Now, the ecosystem also includes DTube, which is a decentralized alternative to YouTube.

Uniswap is a decentralized blockchain-based exchange that facilitates automated transactions between cryptocurrency tokens through the use of smart contracts. Established in 2021, it is now the largest decentralized exchange and fourth-largest crypto exchange by trading volume. It is based on blockchain networks that are decentralized, running open-source software, as opposed to exchanges that are run by centralized companies like Binance, Coinbase, OKEx, etc.

CryptoKitties is a game based on the Ethereum network that allows players to purchase, collect, breed and sell virtual cats. Each of the kitties is a non-fungible token (NFT) – meaning, it’s one of a kind. CryptoKitties was one of the earliest and most successful attempts at utilizing blockchain technology for entertainment and leisure.

The future of DApps

Looking at the speed with which decentralized applications are developed and improved, we can expect them to grow exponentially in the next 10 years. While a completely decentralized online world is still a utopia, DApps make it easier for everyday users to use blockchain technology for their daily needs.

Decentralized apps are going to become a part of day-to-day living, helping to reduce costs and cutting out third parties from personal and business transactions. These applications are expected to take automation and security to a new level.

With more adoption, we can expect DApps to evolve, improving their user interface design and overall usability. They have already taken a place as a valuable tool and paved the way for further growth and development. Decentralized applications are expected to become mainstream as more investors and users take advantage of the efficiency of these platforms.

Saida Sarsenbekova is a blockchain enthusiast and a professional writer with experience working for crypto exchanges, wallets and other blockchain projects. Her mission is to explain difficult concepts in easy terms and teach people how they can personally benefit from decentralized technologies.