Deep Dive: NFT Projects Have Had a Stellar 2021 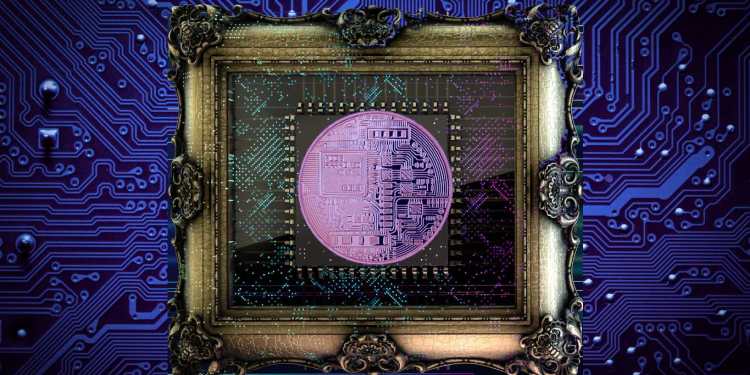 Collins Dictionary recently announced ‘NFT’ – an abbreviation of ‘non-fungible token’ – as its 2021 word of the year. The award captures the meteoric rise in popularity of NFTs this year. In the first half of 2021, NFT sales rose to a record $2.5 billion, with the $2.5 million sale of Twitter founder Jack Dorsey’s first tweet leading the way. Unsurprisingly, NFT startups are now springing up.

A new IESEG School of Management working paper classifies new NFT startups in a novel way to examine these firms’ first-day trading characteristics. It then analyzes their long-run price behavior and risk-adjusted returns and estimates the NFT alphas and betas. Finally, it measures the value NFTs generate on blockchains once they integrate into their ecosystems. It finds the following.

Non-fungible assets are unique assets that cannot be interchanged for another of the same type because they have inherent and intangible value. Examples include real estate, derivatives, art and collectibles. Most investable assets in public and private markets are non-fungible. On the contrary, fungible assets can be exchanged one-for-one, like dollars and Bitcoin.

Non-fungible tokens (NFTs) are ways to record, verify and track ownership of non-fungible assets, like an official register of homeownership. Once a unique digital object is created – say, an online book – a unique ID (hash), a token name and token symbol are ‘minted’ and given to the author. This information is stored and transferred on a blockchain, such as Ethereum.

Crucially, the author can then sell their token. The information of the sale price and the new buyer is then stored on the blockchain. The buyer now owns the unique digital ID, which proves their ownership of the book. Note, though, that the book’s copyright probably remains with the author, and the buyer may not even receive a physical copy. A token only proves ownership.

Why are NFTs so popular?

First, NFTs improve market liquidity and price discovery. You can trade assets more efficiently if you can instantly prove and transfer ownership quickly and securely for a near-zero fee. That way, NFTs increase openness, transparency and financial globalization of the assets.

Let us return to the paper. The author draws data from Binance on projects that embed NFT technology as the central element of the business model, i.e., the whitepaper mentions it. In total, as of August 31, 2021, they find 20 NFT-based projects that list 22 different tokens (see table 1). They categorize these into six groups – NFT purpose-built blockchains, NFT gaming, NFT music, NFT media, NFT DeFi and NFT other. 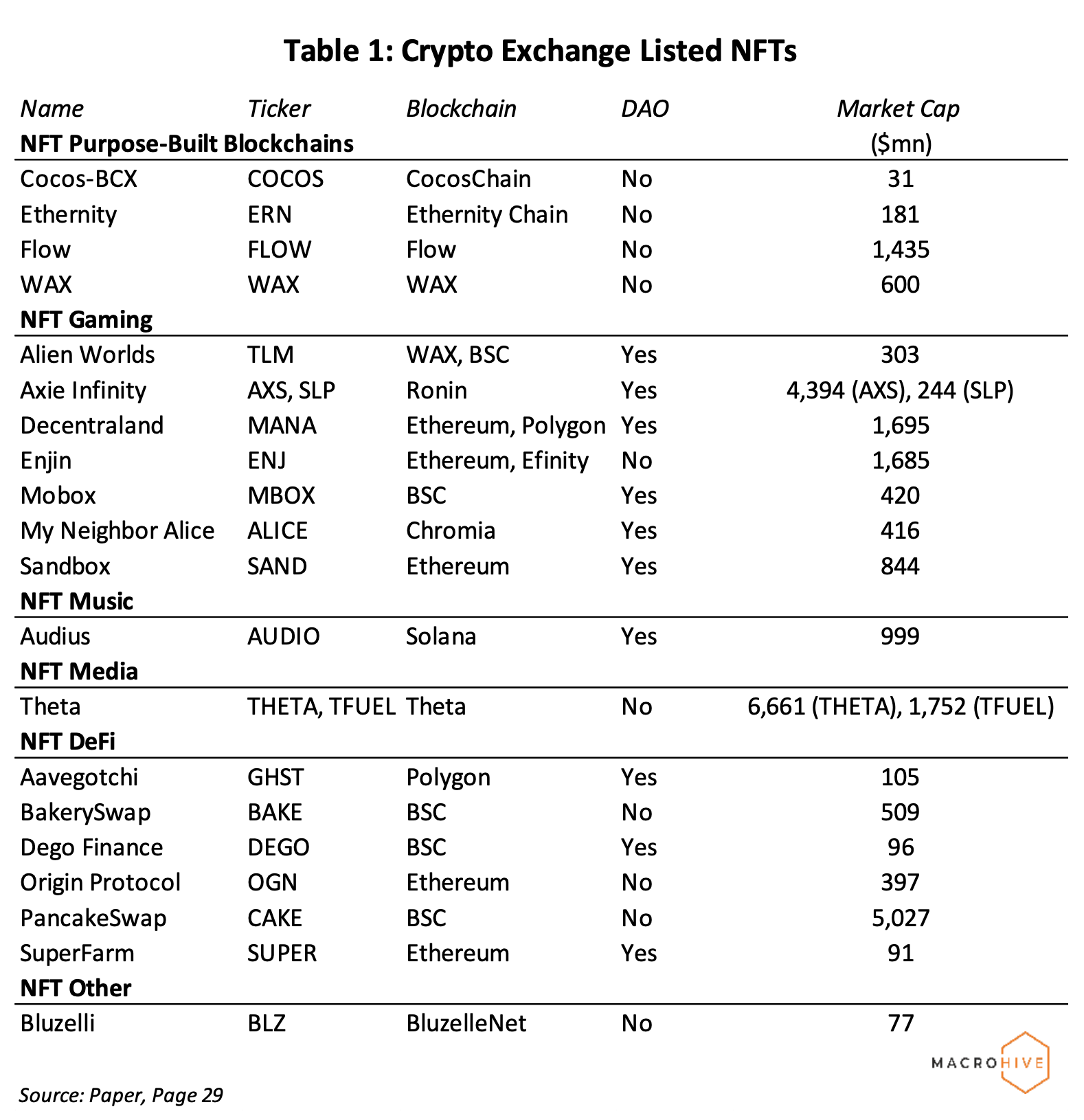 The largest group are NFT gaming projects, followed by DeFi. Most of these projects issue tokens that intend to facilitate the governance of the network, and two projects issue two different tokens – Axie Infinity (AXS, SLP) and Theta (THETA, TFUEL). Also, about half intend to converge gradually into decentralized autonomous organizations (DAOs). The authors analyze the returns of all but ERN, MBOX and GHST.

The remaining 17 projects with 19 different tokens are listed on the exchange for 314 days on average, with WAX as the newest and ENJ as the most established. Seven are NFT ‘unicorns’ (market cap is greater than $1 billion), and without those, the average market cap is $354 million.

The average first-day return across the projects is 130%, with ALICE earning a staggering 24,640%. These are substantially higher than the average first-day IPO return of 35%. Also, the average daily return since the first day is 0.3% (see chart 1). In total returns, AXS gained 53,535% over 300 days – someone made money there. 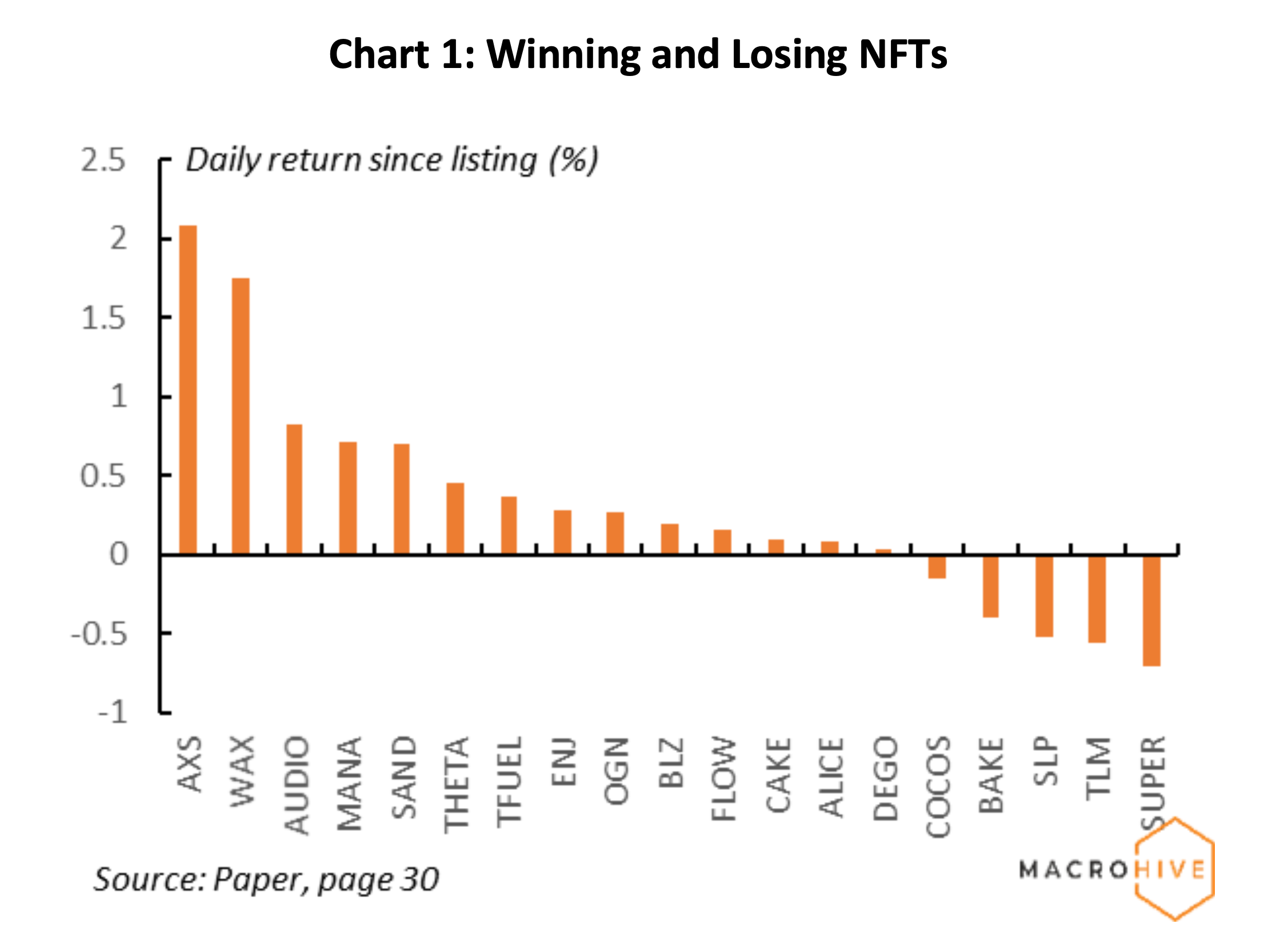 Moreover, if all investments were liquidated on August 31, 2021, the average investment multiple (a venture capital metric) would be six. The largest multiple is TFUEL, which rises to over 73. But some tokens lose. Five of the 19 tokens experienced negative total returns after the first day (seven experience negative daily returns). The largest loser was SUPER, with a -71% return over 160 days.

The author selects two standard measures – the Sharpe ratio (SR) and market-adjusted return. The average SR is 0.32, although ERN, MANA, AUDIO, THETA and SAND all had SRs of at least one. For market-adjusted return, MANA and SAND offered 340% and 255% higher returns than Bitcoin, which itself appreciated 450% during the same interval. Only TFUEL, SLP, THETA and BAKE underperformed relative to Bitcoin.

Next, the paper estimates NFT alpha and beta from the capital asset pricing model (CAPM). The vast majority of NFTs have positive alphas, and AXS, AUDIO, MANA and THETA are among the best-performing NFTs on both absolute and risk-adjusted bases. Across the whole sample, alpha is positive and highly statistically significant at the 1% level. The author, therefore, concludes that “NFTs generate significantly higher returns than the average cryptocurrency in the crypto market.”

12 of the 19 NFTs have betas significantly greater than one, the average being 1.1. The highest beta is two (TLM) and the lowest is 0.8 (FLOW). They also note that almost all best-performing NFTs on both the absolute and risk-adjusted basis have betas that remain below one.

Do NFTs add value to blockchains?

According to the author,

“The NFT boom of 2021 demonstrates convincingly that blockchains are able to one, solve real-life problems, two, be deployed fast and three, create value both for the users and the underlying networks.”

Existing blockchains are venturing into NFT technology to broaden their user base, and the value is clear. In August 2021, NFT sales volume on the OpenSea marketplace neared $4 billion, compared with only $8 million in January 2021 – a 50,000% surge.

The author then estimates how much value NFTs have added to existing blockchains upon integration. They find a couple of NFT events concerning the Solana blockchain are associated with an average unexpected 22% price increase of SOL, equivalent to a $3 billion market cap increase. Similarly, Efinity added around $1.5 billion to Polkadot’s value, and Unifty boosted Avalanche’s value by over $1 billion.

The NFT world is on a high. Even the editors at Collins Dictionary know it. But with the likes of Snoop Dogg selling unique memories, you wonder how much the speed of its rise relates to the hype. As I understand, the digital ID that proves ownership is only as valuable as what the next person is willing to pay for it. Given NFTs usually come without physical objects, it is hard to gauge intrinsic value. And so, a heightened level of speculation will certainly influence token prices, and NFT startups are cashing in.

Fundamentally, though, the technology seems exciting – for gamers, especially. Hours of play may no longer be frowned upon by disapproving parents if players can sell their progress (e.g., skins, cards, etc.). In the art world, artists can sell their art directly and program royalties to receive in future sales. The paper also uses the example of derivatives which – were they to be replaced by NFT counterparts – would be a $580 trillion market. I spotted Yahoo! Finance listed 10 upcoming NFTs to watch out for.

The commentary contained in the above article does not constitute an offer or a solicitation or a recommendation to implement or liquidate an investment or to carry out any other transaction. It should not be used as a basis for any investment decision or other decision. Any investment decision should be based on appropriate professional advice specific to your needs.

Sam van de Schootbrugge is a macro research analyst at Macro Hive, currently completing his PhD in international finance. He has a master’s degree in economic research from the University of Cambridge and has worked in research roles for over three years in both the public and private sectors.