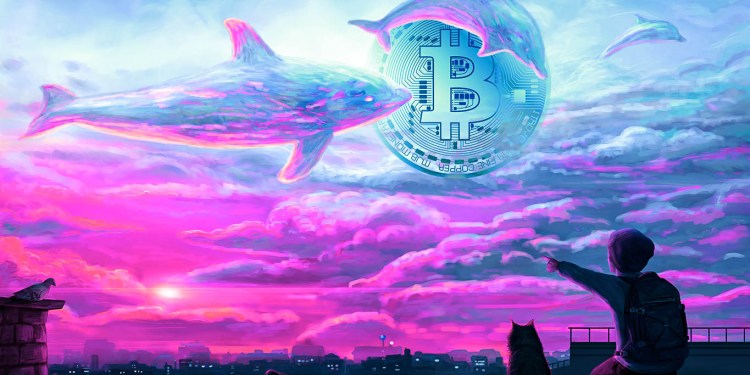 Morgan Creek Digital co-founder Anthony Pompliano is looking at key on-chain metrics to determine whether Bitcoin (BTC) whales are already accumulating the flagship crypto asset as it trades close to $30,000.

In a new Best Business Show episode, Pompliano tells his 337,000 YouTube subscribers that Bitcoin whales have largely stayed on the sidelines during the latest sharp correction that saw BTC lose over 50% of its value in two months.

“There’s still a lack of large buyers. The whales on-chain, those entities with over a 1,000 Bitcoin, they simply are not buying in any material way. It’s basically just going sideways… So even though the price is going up and down, we still are just seeing sideways movement.”

The Bitcoin bull says that whales need to start gobbling up BTC in order for its price to start rising.

“In order for us to see a material move in price upwards, what you can see is that usually, there’s an uptick in whale activity. The whales start buying, and then price follows…

It means that we shouldn’t expect to see any material price movement upwards until we see an uptick in that whale activity.”

Pompliano is also looking at the net realized profit/loss metric, which tracks whether Bitcoin holders are selling at a loss or at a profit. According to the Morgan Creek executive, Bitcoin’s capitulation phase appears to be nearing its end.

“Capitulation seems to be slowing down, meaning that there’s a decreasing amount of losses being realized… At the end of December and in the beginning of January, there was tons of people selling at a loss. But now we’re returning back to zero, kind of a breakeven point. Usually, that ends up meaning that we’ll go back to anyone who sells, after we’ve crossed back over zero, it’s all at a profit.”

Pompliano is also keeping an eye on Bitcoin’s percent supply in profit metric. He says that it is flashing signs that the king crypto could be bottoming out.

“If we look at the percent supply in profit, you can see that it’s only around 70% or so…That is about the same level we saw over the summer when we actually bottomed out before having a massive recovery.”