Kryptomon, the NFT play-to-earn blockchain game where Pokémon meets Tamagotchi and CryptoKitties, launches stage one of its NFT gaming metaverse. As the first project to create a living NFT on the blockchain, players can breed, care for and train their Kryptomons – NFT creatures with unique characteristics and abilities.

Kryptomon’s official launch arrives on the heels of two successful initial NFT egg sales on Binance NFT, the NFT marketplace of the world’s largest cryptocurrency exchange. The debut sale in November 2021 resulted in 2,000 NFT eggs selling out in under one second and generating $180,000 in sales – one of the fastest sales in Binance NFT’s history. A second egg sale launched on February 8, 2022, generated $237,500 in sales again in under one second for 2,500 NFT eggs sold, setting another benchmark for Kryptomon.

“We are happy and proud to have such a strong community of token holders and NFT players that amazed us again in our last sale on Binance NFT that ended in just 0.16 seconds – even faster than the previous one that ended in 0.27 seconds – even though we have sold this time more NFTs in less optimal market conditions. Our community is really one of the things that make Kryptomon such an amazing and fun project.”

Kryptomon merges the core design concepts behind Tamagotchi and Pokémon, reimagining them for the modern era of blockchain gaming and bringing players an entire gaming metaverse they can own a part of. Kryptomons are collectible virtual monsters – living NFTs with features defined by a unique 38 random parameter digital genetic code. The platform conducts monthly augmented reality treasure hunts during every full moon, sending players, armed with their smartphones and crypto wallets, on a real-world quest for loot boxes with consumables and NFT Kryptomon eggs.

As part of the stage one release campaign, players receive daily loot boxes with valuable consumables, including food, bandages and training cards for their Kryptomon. The more Kryptomons users collect, the more loot boxes they receive daily. Players use the consumables to feed and train their Kryptomon, forging stronger bonds with their living digital companions. This will benefit players in stage two, with the release of a full-fledged combat system. If trainers neglect their Kryptomon, the creatures will freeze, with players having to pay a fee to unfreeze and continue using them. 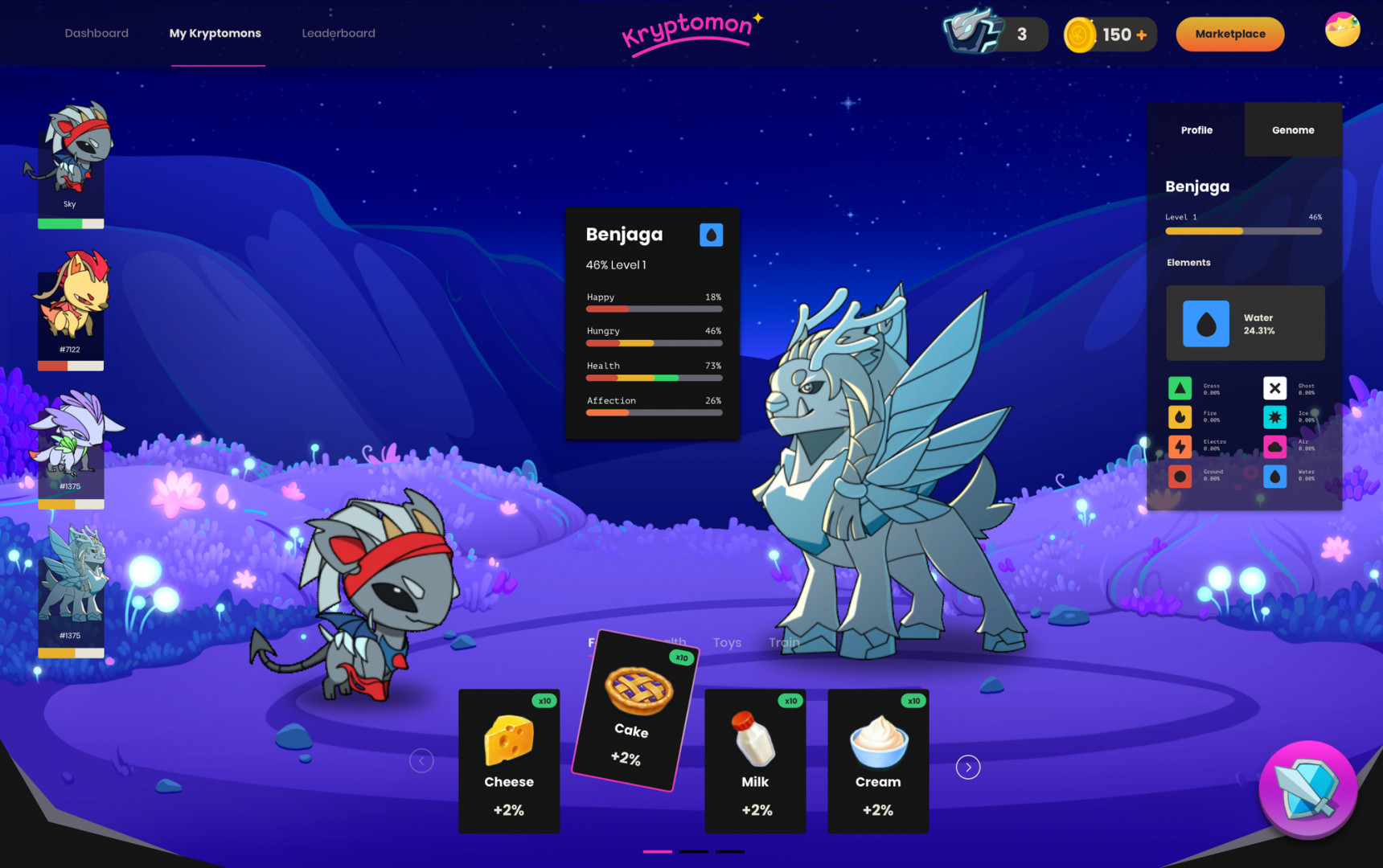 Starting on February 15, 2022, players will be able to breed their Kryptomon NFTs and begin selling the new NFT eggs they generate on any of the seven NFT marketplaces that have partnered with Kryptomon, including Kryptomon’s official KMarket marketplace. On the same date, Kryptomon will release its ‘play-to-earn’ (P2E) mechanics to the game, making it possible for players to start earning money in the form of KMON tokens and NFTs as they enjoy the game.

Kryptomon’s marketplace enables Kryptomon NFT trading, purchases and KMON token staking to participate in NFT lotteries and generation of ‘candies,’ which are used as in-game currency to purchase loot boxes and items.

Moving ahead with its gaming platform, the Kryptomon team has expanded its advisory board with gaming veterans including Shinichi Okamoto, former CTO of PlayStation, and more recently Raz Friedman, CPO of gaming platform giant Playtika. Friedman joined the advisory board of Kryptomon following months of close mentorship and early seed investment in the project, bringing over a decade of experience at Playtika and a key figure in expanding the platform’s market cap to $7 billion dollars.

“We’re ecstatic for the stage one launch of the game. Being able to interact, breed and earn with their living NFTs is a huge step for the trainers and is just the beginning for the metaverse that we are putting together, update by update. We believe that AR and blockchain will revolutionize gaming, and we spearhead this change with a game built on beloved mechanics.”

Set in the Kryptomon metaverse, community members play as ‘trainers,’ taking care of their own NFT pet monsters, which have a unique and mutable genetic code made up of 38 randomized parameters that determine their physical and behavioral characteristics. They are capable of learning, falling sick, getting hungry and protecting their trainers when out on an adventure in the physical world. In turn, trainers will have to care for, feed and train their Kryptomon partners in order to grow and prepare for the battles ahead. Kryptomon aims to create the next step in the evolution of crypto and metaverse gaming by using blockchain, digital genetics and location-based technologies.