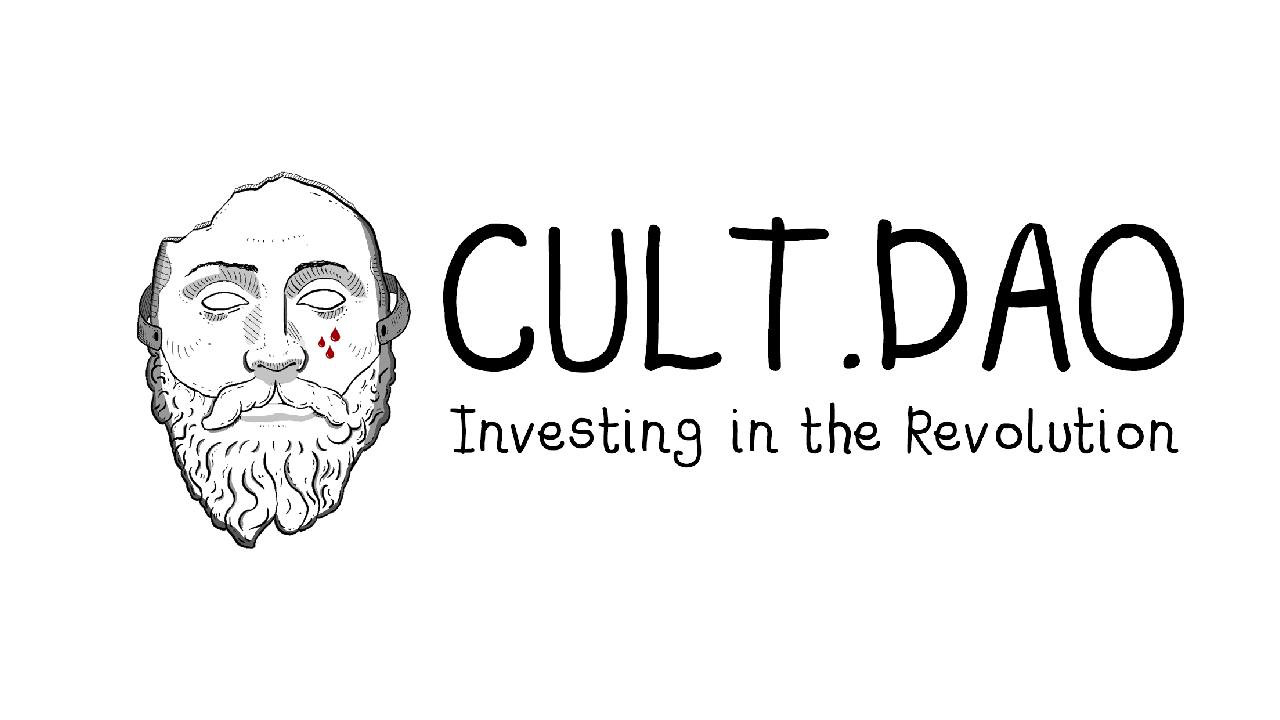 Cult DAO, a community-driven decentralized autonomous organization, published recent data on its hyper-deflationary CULT token, gaining the necessary traction and volume to overcome an initial stage of anonymity. These math-backed revelations are scattering away any remaining doubts that CULT is a meme coin. On the contrary, it shows the token’s ambition to challenge the most powerful cryptocurrencies in the market hierarchy. 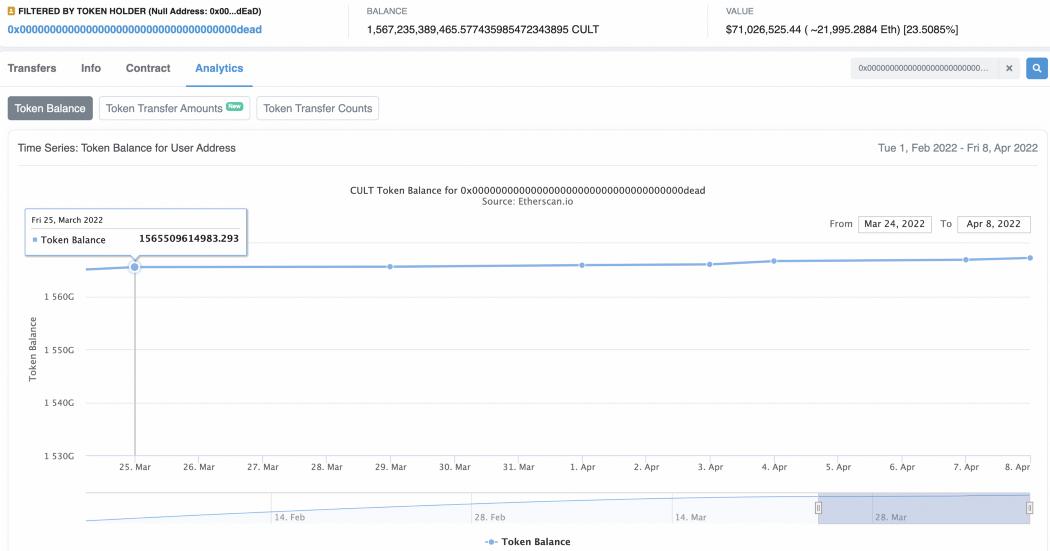 The Cult DAO treasury accrued 81.496 billion CULT tokens during the same period, equaling nearly 130 ETH. It’s worth noting that the protocol takes a 0.4% tax from transactions, which it sends automatically to the treasury. In time, these funds should help finance investments in decentralized technologies.

Below is the average amount of tokens the treasury collected.

Furthermore, on April 11, 2022, more CULT was taken out of circulation than two days before with twice the volume. This perfectly illustrates the power of Cult DAO.

But where do the additional tokens come from?

Currently, the protocol registers 1.9 trillion staked tokens and another 1.567 trillion were burnt. The project’s increasing popularity has led to a steady surge in treasury volume. Simply put, an increment in activity takes more tokens from the general circulation into the treasury.

Below, you can see the effect this had on the treasury balance. As the tokens move from general circulation to the treasury, the protocol takes into account the reduction in percentage for future movements. In other words, the treasury is filling faster than proposals are sending CULT out. Therefore, the supply is constantly squeezed. 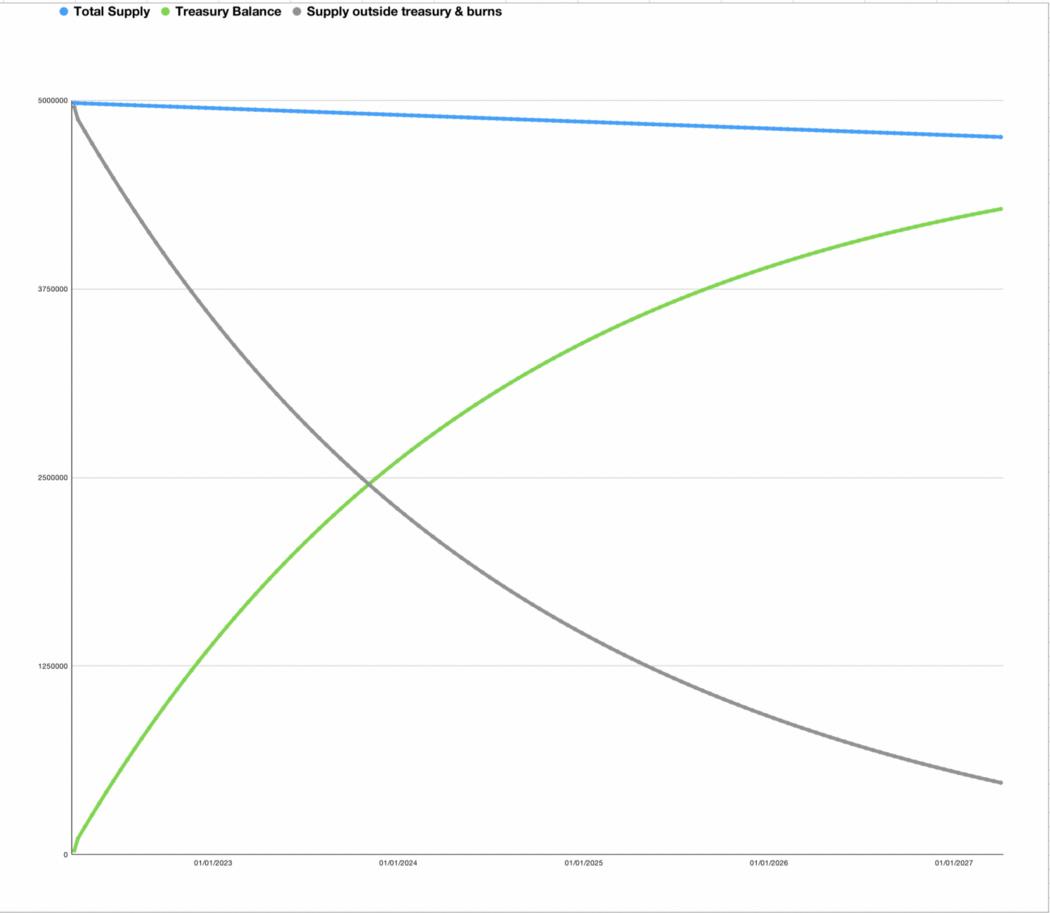 These recent massive token movements were not enough to decelerate the increase in the CULT balance within the treasury. On the contrary, the treasury volume increased thanks to ‘The Many’ – Cult DAO community members with voting rights.

Cult DAO is a blockchain-based DAO aiming to accelerate the decentralized finance revolution. Its goal is to empower people with the necessary tools to ‘break away from societal, economic and other norms.’ To this end, its users can actively vote on funding for projects focusing on decentralized applications.

The protocol uses CULT, a hyper-deflationary token, to support the development of a fully decentralized economy. Developers state that CULT is not a charity token or a speculative coin, unlike some deflationary tokens in the market.

Cult DAO burns 10,000 tokens out of every 60,000 it raises. It also uses a half-and-half redistribution model that sees 50% of the tokens burn and the remaining half go toward dCULT holders. This occurs when an investee project sells its tokens for CULT.

If it maintains its trajectory, CULT could become a candidate to challenge dominant projects within the next five years. And judging by its current progress, the possibility of flipping big crypto projects is not that unlikely.

For more information about Cult DAO, please follow the links below.