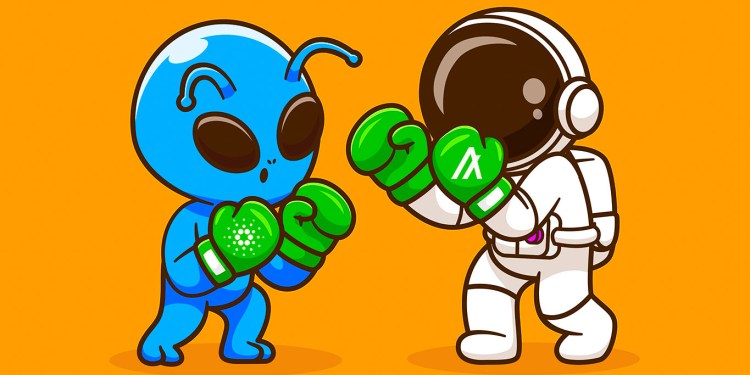 A popular crypto analyst known for doing in-depth research is reacting to the news that a key developer has decided to jump ship to work for a competing project.

“Last week IOG’s director of Cardano architecture John Woods announced that he would be leaving IOG to join the Algorand Foundation as chief technology officer. For context, Input Output Global, IOG, is one of the two companies that’s building Cardano.

John’s departure seems to have taken the Cardano community by surprise, though die-hard Cardanians will know that John had only joined IOG in October last year to fill in for Duncan Coutts, who’d been away on paternity leave and returned to his post earlier this month.”

The host notes that future cooperation between the two Ethereum (ETH) competitors remains a possibility.

“Cardano founder Charles Hoskinson took to Twitter to congratulate John on his new role, noting that it could open the door for collaboration and partnerships between projects in Cardano’s and Algorand’s expanding ecosystems.

John likewise thanked the Cardano community for their support, noting that he ‘had a wonderful time contributing to building Cardano.’ Some of you may know that John was a regular guest during Cardano’s mid-month development updates and end-of-month 360 ecosystem recaps.”

Guy calls attention to a tweet by Woods that suggests Algorand might see Cardano as competition as ALGO seeks to enter the top ranks of the crypto ecosystem.

“What’s interesting is that in a response to a tweet by the Algorand Foundation announcing John’s addition, he noted that he’s intent on making Algorand a top-10 cryptocurrency by market cap, which begs the question of whether we will see competition rather than cooperation between his new and former employers.

This seems to be more than speculation as well since Cardano and Algorand are both working on eerily similar scaling technologies, namely pipelining. Whatever knowledge John gained while working with Cardano is likely to be shared with Algorand, which could accelerate its scaling development.”

The Coin Bureau host also addresses the potential negative impacts of Woods leaving on the impending Vasil system upgrade which he discussed at length one week ago.

“Cardano could see a slowdown in development momentum due to the change in staff, but I don’t imagine this slowdown will be all that noticeable. After all, Cardano will soon be completing its latest hard fork combinator called Vasil, which should significantly improve its scalability.

Ardana founder Ryan Matovu recently mentioned in April’s Cardano 360 that Vasil will scale Cardano’s layer-1 blockchain to its limit. With Algorand expected to roll out its scalability upgrades in the coming months, expect to see lots of fireworks or both ADA and ALGO.”