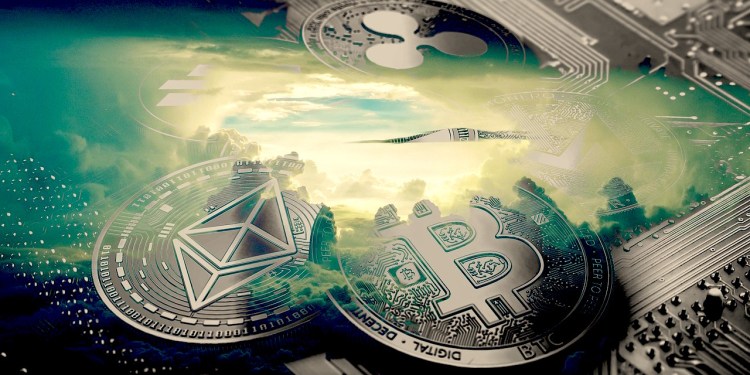 However, research conducted by Axa Investment Managers shows that despite the massive growth, cryptocurrencies still pale in comparison to the $100 trillion global bond markets and $80 trillion in global equities.

Financial crypto products under management, including the derivatives market that was jumpstarted by the Chicago Board Options Exchange and Chicago Mercantile Exchange in December of 2017, along with investment funds and alternative investment vehicles, are also relatively marginal, at roughly $2 billion to $3 billion.

Bullish analysts see the status quo as a sign that Bitcoin and other cryptocurrencies have massive growth potential, especially if they replace money in the long term. Spurring innovative solutions is the race to beat Bitcoin as the most popular digital currency.

Ripple delivered news of its software solution xCurrent being integrated by Santander, allowing the bank’s customers to complete same-day international transfers. Although the integration does not include XRP, Ripple’s cryptocurrency, the Ripple’s remittance network is maintaining its leading edge with banks.

Litecoin had a setback when it repealed LitePay, its merchant solution, but reached a big milestone with Mac users with the release of a step-by-step tutorial on how to set up a Lightning Network node for Litecoin on a Mac.

Meanwhile, Ethereum got a boost from NASA. A research project conducted by Dr. Jin Wei Kocsis at the University of Akron and NASA will explore the development of a “decentralized, secure, and cognitive networking and computing infrastructure for deep space exploration” on the Ethereum blockchain.

Investors who are more interested in the underlying blockchain technology than the immediacy of being able to spend crypto at the mall are trying to quantify key factors – adoption, new streams of institutional money and blockchain disruption – to devise the best investment strategies.

Despite its volatility, adoption of Bitcoin has been surging. Institutional dollars are set to roll in and strengthen confidence in cryptocurrencies on the heels of interest from heavyweight investors George Soros and the Rockefellers. Their smart money is betting on crypto assets.

Futurist James Canton and CEO of the Institute for Global Futures, a leading think tank, predicts “an exponential increase of new investment vehicles to come from cryptofinance.” Futurist Thomas Frey says cryptocurrencies will “displace roughly 25% of national currencies by 2030. They’re just much more efficient, the way they run.” And, as reported by The Times of London, Jack Dorsey, CEO of Twitter and payments company Square, said, “The world ultimately will have a single currency, the internet will have a single currency. I personally believe that it will be Bitcoin.”