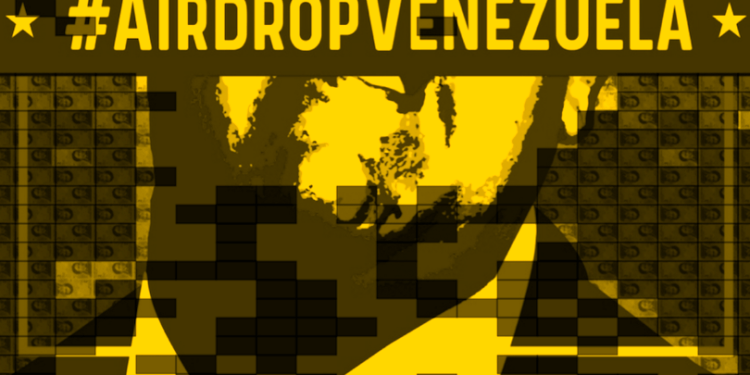 Fox News reports that US intervention in Venezuela may begin very soon, according to retired Brigadier General Anthony Tata, as the US, in favor of opposition leader Juan Guaidó, tries to force President Nicolás Maduro out of power.

Maduro has refused aid for his country, burning trucks on bridges and stranding convoys full of food and medicine on the Venezuelan borders of Colombia and Brazil.

The humanitarian crisis continues to rage amid extreme hyperinflation and protests in and around Caracas. The country’s economic instability has led to violent clashes and a drought in basic goods. People are increasingly moving their money into Bitcoin at record-breaking volumes as a hedge against the national currency and to prevent their funds from being seized.

According to a Fox Business report, General Tata says,

“I think in the next two weeks, we are going to see this thing bubble up and foment. The aid has to get in there and importantly President Trump has made this sort of a line in the sand so he needs to do something that will affect, or he needs to set the conditions that will affect the transition to [Juan] Guaidó for power.”

Journalists and residents alike are facing increasing violence. Swedish journalist Annika Hernroth-Rothstein reports for the Daily Beast that she was robbed, beaten and threatened with death.

Ive written about my experience at the #Venezuela border for @thedailybeast

Amid Venezuela Violence, Maduro’s Men Put a Gun to My Head. My ‘Crime,’ Journalism. https://t.co/N53Go8evvk

Soldiers are defecting from the National Guard.

A GNB soldier has just defected to Guaido and has crossed Simón Bolivar bridge into Colombia#Venezuela #26F pic.twitter.com/De2sTgzSzS

In a symbolic tear down of Maduro, activists and artist cryptograffiti in Cúcuta are using Bitcoin donations to raise funds for Venezuelans in need. An interactive crypto mural comprised of 1,000 bolívar shows President Madura being phased out. As contributors select and click an interactive sliver of the mural, a pop-up reads,

“Donate $10 or more of BTC and we will take down this bolivar IRL!”

Once the donation is made, the bolívar is removed from the mural. You can watch the broadcast here.

The mural is part of #AirdropVenezuela, a crypto drive to help Venezuelans. The campaign is accepting donations in several cryptocurrencies, and says that 100% of the donations received are sent to Venezuelan recipients.

People from anywhere in the world can send the following cryptocurrencies.

Maduro has his supporters.

They are calling the organized support for Guaidó an orchestrated coup to oust him from power. CNN reports that Venezuela’s self-declared interim president Juan Guaido says he will exercise his ‘duties as president’ upon his return to Venezuela from Colombia after his meeting on Monday with US Vice President Mike Pence.