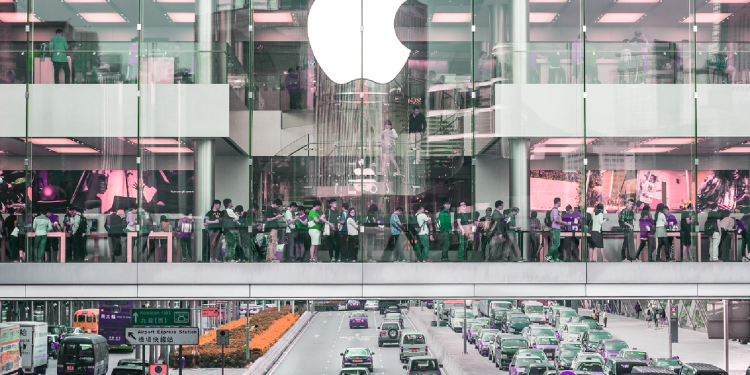 Blockchain development is well underway at some of the biggest companies on earth. Here are nine mega brands with confirmed projects that utilize blockchain technology.

A provisional patent filed by Apple in December describes a blockchain system designed to create and verify timestamps that could be used to fight hackers and certify digital signatures.

The patent describes a program that creates a secure timestamp on a blockchain ledger. According to Apple, “The new time becomes part of a blockchain when a miner solves the hash puzzle related to the new block holding the transaction indicating the new time. Because of distributed consensus, attempted alteration of the blockchain by a malicious node in terms of the time value will be detected by honest nodes.”

Google is well-known for being one of the biggest buyers and investors in blockchain startup companies. Now, the company is reportedly also working on its own blockchain protocol.

Bloomberg reports, “The Alphabet Inc. unit is developing its own distributed digital ledger that third parties can use to post and verify transactions… Although the timing of any product release is unclear, the company plans to offer this to differentiate its cloud service from rivals. It will also provide a white-label version that other companies can run on their own servers, the person added.”

Porsche is well past the beginning stages of adding blockchain technology to its cars. The company says it’s already successfully implemented and tested the technology in its vehicles.

The biggest retailer in the world is designing a “smart package” blockchain system that’s described in a patent filed in March.

The patent describes a device that would monitor the package along with a “delivery encryption system comprising a block chain for package tracking and authentication.” The document also highlights the need to ensure online shoppers get their items in a secure fashion, especially when a product needs to be shipped in a controlled environment.

The beverage giant is working with the U.S. State Department to develop a blockchain ledger designed to help eliminate forced labor across the globe. In March, Reuters reported that Coca-Cola “has been exploring multiple blockchain projects for more than a year.”

The Bitfury Group, a US tech company, is slated to help build the platform, with help from Emercoin.

Japan’s biggest e-commerce company is launching a blockchain-based cryptocurrency of its own.
“Rakuten Coin” will be implemented into the company’s online rewards system. Rakuten’s current system has already handed out over $9 billion in rewards. So far, there is no launch date for the new coin.

IBM is well-known for being at the forefront of mainstream corporate blockchain adoption. The company recently showed off a chip that it says is the world’s smallest computer, designed to help companies use the blockchain to verify the authenticity of products in a given supply chain.

The company uses a blockchain based on Hyperledger Fabric and says it has delivered distributed ledger services to 400 clients around the world, including projects in banking, government, healthcare and logistics.

Co-founder Marc Benioff recently announced that Salesforce is working on a blockchain product of its own.

In an interview with Business Insider, Benioff said he has a vision of how blockchain and cryptocurrency can be integrated in its powerhouse customer relation management platform, and that he hopes to have it ready by September of this year.